Gillian English reclaims a queen from Shakespeare and reframes her as a feminist figure. 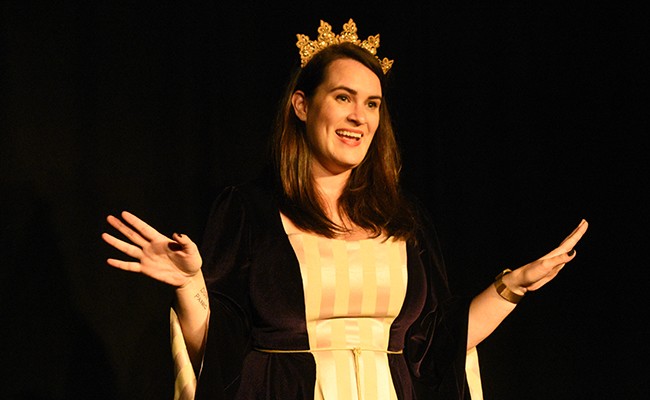 Gillian English has a lot to say and she talks fast. Having toured New Zealand, Australia, the UK and Canada with many successful shows, she has had a lot of practice. "It always takes about 100 performances before I have something where I want it," she says. Maybe she's also a perfectionist.

In English's latest show, she speaks a mile a minute, recites Shakespeare, jumps from harsh truth to punchline and back again. The show is She Wolf, about the life of Margaret of Anjou—who became Queen of England twice—whose story is often misinterpreted, thanks in no small part to Shakespeare's history plays. Was she a vengeful monster, as Shakespeare might have us believe? Would we be asking these questions of a man?

"I saw parallels with her and every other woman in politics," says English. "And all of my work has a very strong feminist bent, so I decided to combine six years of professional standup with a Masters degree and create this show and hope for the best."

In addition to her Fringe successes, English is also releasing a comedy album with the Howl & Roar, a new women-centric comedy record label, recording it this week at the Bus Stop Theatre.

Halifax is the last stop for She Wolf but English is heading back to Australia for Melbourne Fringe at the end of the month to premiere Ten Things I Hate About Taming of the Shrew, another feminist takedown on Shakespeare's misogyny. "I want people to think," says English. "And I want people to laugh, which is a really great vehicle for delivering hard truths."