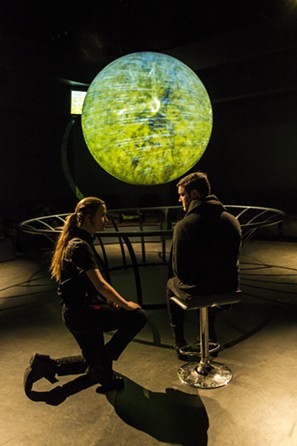 Fifty-eight plays from now to September 7th. That's what I'm aiming for. (And even at that, it is still physically impossible to see every play at this year's Fringe.)

My reviews will be short., but I'm trying out a star rating system to see if that helps in choosing what to see. However, we all know that theatre reviewing is an art, not a science. My one star play may rate four in your books. So, why not forgo my advice a few times and see if we agree?

All the information about ticket prices, times and locations is available by clicking on the title of the show.

It is with considerable trepidation that I start my annual "Fringe Binge" by handing out a five star rating. I mean, talk about nowhere to go but down! But this show is that good. Science fiction fans will love it for its amazingly detailed vision of the future. Theatre-lovers will be blown away by the incredible performances and innovative staging. Techies will marvel at Nick Bottomley's virtuosic mastery of projections.

The story is set some 450 years in the future, when the world has had to come to terms with the devastation caused by dwindling resources. A new order called the "Cadimus Protocol" has been created which delegates difficult decisions to specially trained psychopaths who can render judgement without empathy.

Michael McPhee's audacious script creates characters with great emotional depth in a fully-formed world. The show is double cast, with opening night starring Mary Fay Coady as the chilling yet compelling psychopath Del, Sean Skerry as the empathetic and charmingly neo-human Na'vi, Annie Valentina as Del's pychopathic mentor Max, Kim Parkhill as Andreas, the Cadimus Protocol's fading creator. (Oh, and Ben Stone in a delightful cameo as Del's mother.) I can't vouch for the second cast, but these four are so good, it's difficult to imagine anyone else in the roles. I'd see it twice, if time would allow!

Tribe of One is the launch of The Doppler Effect's sci-fi universe, The Cadimus Protocol. Look it up here.