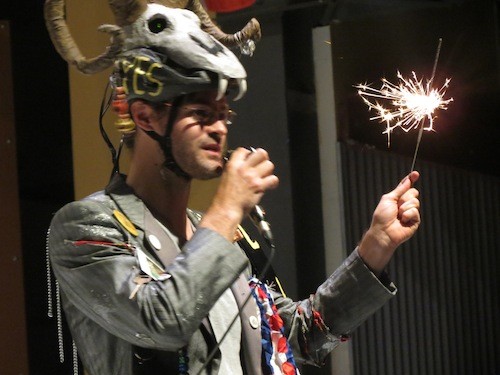 Collective Creation is often more about the process of creating theatre than the product that comes from it and often these pieces are offered up to audiences before they are fully-formed to let the audience in on this process and to allow this new interaction inform and influence the work. This is really ideal for something like the Fringe Festival, which is like an incubator for new local work, and I think Fringe audiences often enjoy, as I do, watching theatre this is actively being born rather than skillfully (or not so skillfully) mass produced.

There are some terrific moments in this show and I thought the strongest and most poignant and beautiful of them was the ending. The story centers around a brilliantly esoteric question, “What happens to us when we die?,” which leads into all sorts of fascinating directions, including a theatrically brilliant monologue by a wizard hobo (played by Bevan-John) with a sparkler. The play at the moment is only 35 minutes but I think the potential for where this question can go is mammoth, which is really exciting and in the hands of these three performers I really liked when those directions were strange and unexpected. I have never seen a hobo wizard onstage before. I would have enjoyed being led deeper into his world and his psyche.

The three main characters in the central conceit of the play are best friends, Maggie (Galbreath), Chris (Bevan-John) and Bea (Thornhill) and the plot hinges on how Maggie and Bea cope with the sudden loss of Chris. The difficulty I had with this was Chris was characterized as this exuberant, boisterous, creative and fun-loving guy, a terrific one, who made awesome puppets from junk and had IPod dance parties in the forest. Yet, both the girls seem “too cool for school” for it, even after his death, even though they are obviously grieving, they still would rather throw out his puppets than keep them and even the smallest glimmer of fun and playfulness they have together is alcohol and not joy induced. If Chris and Maggie and Bea are awesome best friends, I want to see this awesome best friendship because it makes it so much more tragic (and easy to empathize with) when it suddenly is taken away.

I loved that Bea and Maggie were grieving in completely disparate ways and that a rift grows between them as a consequence of it. If Bea is going to shut down and reject the silly and playfulness that Chris represents to her, that is a terrific choice, but it would be stronger if we see her as being less repressed, serious and judgmental at the beginning so the shift in her personality is even more clear and profound. There is a lot of room for all three of them to more fully explore these three characters, and the actors are dealing with some lovely complex, and at times subtle, emotions, which I think will help to make them come even more alive, unique and three dimensional if these performers continue to develop this show.

Reprinted with permission from The Way I See It Theatre Blog twisitheatreblog.com