From ABC to VHS

Director Jason Eisener’s love of anthology horror films has lead to two new projects, The ABCs Of Death and the upcoming S-VHS. 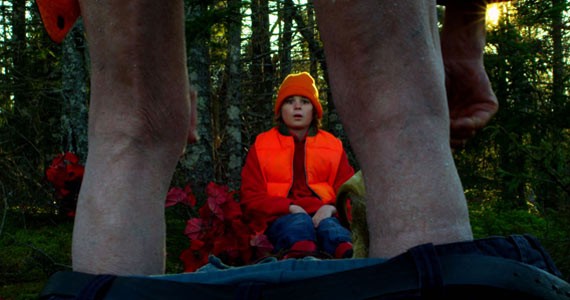 If you were worried that Hobo with a Shotgun director Jason Eisener was in danger of losing his edge any time soon, please consider this unused first idea for his contribution to the alphabet-inspired anthology horror film The ABCs Of Death: "We originally picked the letter N because we wanted to do something with nunchucks," he says. "But my original idea was too ambitious---it involved two 1960s hair salon gangs battling it out with nunchucks in a food court."

Eisener eventually settled on the letter Y for his short, part of a collection of 26 segments made by alumni of the Austin, Texas-based genre celebration Fantastic Fest. The ABCs Of Death played at this year's Toronto International Film Festival before debuting locally at the Atlantic Film Festival (the film will be available through On Demand January 31 and in select theaters March 8).

However, the Dartmouth-based filmmaker's entry, Y Is For Youngbuck, doesn't mark the end of his involvement with anthology horror. He's also wrapped production on a segment for S-VHS, the sequel to this year's compilation movie V/H/S. When producer Roxanne Benjamin contacted Eisener to see if he'd be interested in participating in the sequel, he was initially hesitant about the series' found-footage format.

"I haven't been too inspired by this style lately," Eisener says, although he admits to a fondness for early experiments with the format like Cannibal Holocaust and The Blair Witch Project. "But Roxanne sent me the [original] film, and it got us really excited. The filmmakers used some amazing perspectives. I pitched the team my own crazy perspective, and they loved it and gave us a green light. I soon realized I took this genre for granted a little. It was honestly our toughest project yet, but it's one of my favourite films we've made."

Eisener wrote his S-VHS installment with longtime collaborator John Davies. "We've known each other since we were five years old," he says, "and we based a lot of our segment on the memories and fears from our childhood. We actually went so far as to remake a scene from one of our old Hi8 tapes from high school, pranking my sister at 3am."

Participating in anthology films is especially appealing to Eisener, who calls himself a huge fan of the format. When asked about the anthologies that influenced him, he cites Joseph Sargent's 1983 film Nightmares as a particular favourite. "The Bishop of Battle segment is one of my favourite short films," Eisener says, referring to a sequence that finds Emilio Estevez trapped inside a fiendish arcade game. The Stephen King-scripted Creepshow and Creepshow 2, the HBO TV series Tales From the Crypt, and Mario Bava's Black Sabbath also fostered Eisener's love of horror anthologies. S-VHS was recently announced as part of the 2013 Sundance Film Festival's Park City at Midnight line-up. Though it's still awaiting distribution, details of a wider release are expected soon.

Eisener is hoping to organize another Halifax screening of The ABCs Of Death at some point in the new year, possibly at one of his own Thrillema events or in collaboration with the Carbon Arc Cinema. Although he isn't ready to announce his next feature-length film project quite yet, he does say that he has "a couple of awesome projects in the works."

Eisener will admit that he's developing a spin-off film starring The Plague, the two immortal bounty hunters featured in Hobo. He calls it "our metal opera chase film. I'm talking giant saw blades for motorcycle tires." One can only hope that there's room in there for some nunchucks as well.