From ashes to opportunity 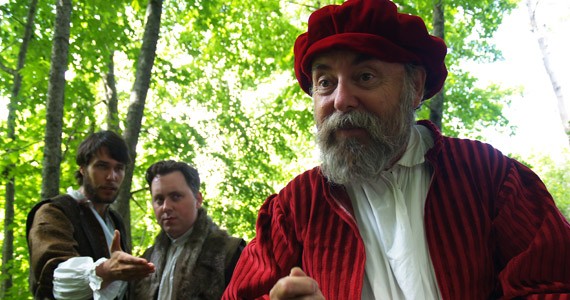 Jesse MacLean stands in front of the Park Place Theatre and kicks the charred remains of a garbage can. "You can see where the fire started," he says, pointing to the circle of ashes and gesturing up the side of the building where the flames spread into the attic storage space on the morning of June 1.

City staff has covered the melted siding with painted plywood so that the building doesn't look too unsightly. Inside, there is an unpleasant, acrid smell reminiscent of bacon smoked in a plastic wrapper. MacLean says it's become a frequent occurrence for any question starting with "Where is that...?" to be answered with "Lost in the fire."

The Shakespeare By The Sea cast and crew have been allowed to use the office space at the front of the building, but the theatre, which is used for rehearsals and as a performance space on rainy days when shows can't go on outside, will require extensive renovations before the public is allowed back in. And that means loss of revenue. "In the past on rainy nights, we've had an average of 70 people attend the indoor shows at the Park Place Theatre," MacLean says. "So far this year, we've had to cancel five shows because we have no indoor space. That really starts to add up."

MacLean says support is building in terms of audience attendance. Numbers are growing (the best evening so far has been 311 attendees, leaving a way to go to match the previous record of 602) as the word gets out that it's business as usual in the Cambridge Battery.

So while the busy season is still unfolding—Merchant of Venice has just opened alongside The Taming of the Shrew and the family-friendly Cinderelly—MacLean and co-artistic director Elizabeth Murphy are dreaming of ways that this setback could be turned around to benefit the whole arts community.

The building is owned by the City of Halifax, and estimates have been made that it will cost in the neighbourhood of $150,000 for the repairs needed. District 7 councillor Waye Mason was slated to meet with SBTS earlier this week and brought a motion to council last Tuesday to request a staff report in hopes of getting the repairs rolling by fall.

Is putting money into the damaged building the right thing to do? "We can't help but wonder if this could be an opportunity to build something that would accommodate the growing needs of our growing theatre community. Rehearsal space is at a premium in the city, and that's really been highlighted by this fire. Other companies were booked into the space right from the fall through to January. Now they're scrambling for other suitable alternatives, and there really aren't many," says MacLean. "What if the city created a space that would meet the needs of Shakespeare By The Sea, but could also be used by other artists and for civic events like meetings?" MacLean names organizations like Halifax Pop Explosion, Halifax Jazz Festival and In the Dead of Winter as ones he could see being interested in using a 200-seat theatre.

He also points out that the Park Place Theatre building is at the gateway to Point Pleasant, the largest forested park on the peninsula and favourite spot for locals and visitors. "How great would it be to design a building that reflects something of Halifax's heritage?" MacLean asks. "The truth is that there is a real economic benefit to fostering the arts. Maybe this is just a good opportunity to do that."