From day one, advocates knew shooting was linked to domestic violence

In the wake of the event, feminist groups and women’s shelters across Canada have been calling for recognition and action. 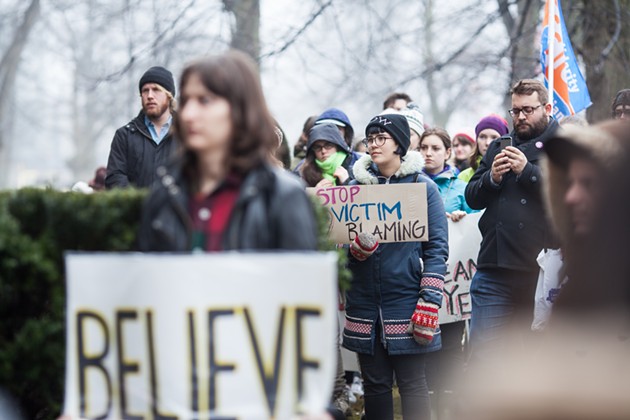 Meghan Tansey Whitton
Photos of protesters outside of the Nova Scotia Provincial Courthouse in March 2016.
Although it took RCMP over a week to address the Nova Scotia massacre’s relation to domestic violence, Canadian feminists and activists say they saw the telltale signs from the start.

“I immediately thought this probably had a domestic violence event that precipitated it or was an element to it,” says Leighann Burns, a founder of the Ottawa-and-Montreal-based Feminist Collective. With her 30 years of experience working in shelters for abused women, Burns is particularly concerned about the lack of discussion around this issue by police and in the media.

“We were watching very closely, and I was really troubled by the fact that the RCMP was not giving accurate information about what was going on, particularly about the domestic violence act,” says Burns.

During the massacre of April 18 and 19, we now know the common-law partner of the gunman was the first victim. She escaped and was forced to hide in the woods in Portapique overnight, only emerging at dawn to call police and warn them the suspect was driving a mock RCMP vehicle.

In the days following the tragedy, police have given contradicting information about the incident, at one point calling the first female victim a “catalyst” for the entire event.

"Even yesterday's press conference, they continue to hedge about who the partner is,” says Burns, who thinks if the woman's privacy is the concern, police should clarify that. "Why not just say it outright? We're concerned about this person's privacy, and therefore, we're not going to speak in a great deal of detail, but this is what we know."

In the wake of the event, feminist groups and women’s shelters across Canada have issued statements about its link to domestic violence.

“Avalon Centre stands in solidarity with feminist and anti-violence organizations in recognizing this act as gender-based and misogynist,” reads a post from Avalon Sexual Assault Centre in Halifax.

Adsum for Women & Children in Halifax says it’s never too soon to talk about the reasons behind the attack and murders. “The hatred of women that leads to violence and eventual homicide is known as ‘femicide’ and must become part of our vocabulary,” says Adsum’s statement.

“I had been so frustrated after hearing nothing about male violence against women in the mass shooting that I could hardly stand it. I can't tell you how angry I was, I was so upset,” says longtime activist Linda MacDonald.

So MacDonald and six other Maritime women gathered for a Zoom call just days after the incident. “The strategy was that we do a press release, and that's what we did, and it gathered a lot of attention really,” she says.

The release from FFF calls for a public inquiry into the events of April 18 and 19 to include an analysis through a feminist lens.

“We just can't ignore the misogyny and that's why we need an inquiry to start. If the RCMP aren't going to embrace this as one of the elements of the investigation, then it has to be taken to the inquiry,” says MacDonald.

MacDonald says the question shouldn’t be whether misogyny played a role in the shootings, but how much of a role it played.

According to the Canadian National Femicide Observatory’s #CallItFemicide report, 148 women and girls across Canada died in 2018 due to violence. Of those cases, 91 percent of suspects were male, and 53 percent were the male partner of the victim.

“Femicide can be prevented. And if we can prevent femicide, then we can also prevent the homicide that flows out around it,” says MacDonald.

MacDonald says a feminist inquiry would examine the red flags that were missed in this case.

“A real investigation into the history of how he treated women in his life, whether they were co-workers or neighbours or clients that he had that were getting their teeth done,” she says.

“Often the private face of an abuser is not the same face that they display publicly. So you may very well know lots of people who are doing this, but not know that they're doing it,” the Ottawa-based advocate explains.

Feminists have studied similar high-profile cases over the decades. In Ontario, two inquests into women’s deaths at the hands of their partners–the Arlene May case of 1996 and Gillian Hadley in 2000–drew national attention.
May’s inquest came with a whopping 214 recommendations for police and the crown to implement. But in the end, those inquests didn’t lead to systemic change.

“Basically the Ontario government came out on the doorsteps of the courthouse who said they had already implemented all these things, which was clearly not true,” says Burns.

“Studying a problem endlessly without actually doing anything about it is not going to change.”

In the case of the École Polytechnique massacre, it took three decades for the government to acknowledge the misogyny behind it, finally installing a new plaque in naming the murders as violence against women in December 2019.

“We knew what his intentions were when it happened, but there was this sort of whitewashing of it, and emptying of that meaning that it actually held, and only 30 years later that they put a new plaque,” says Burns.

And despite the national attention, despite naming the problem as domestic violence, and despite the plethora of women and advocates calling for an end to femicide – Burns’ biggest worry is that the problem will continue.

“Studying a problem endlessly without actually doing anything about it is not going to change,” Burns says. “The major systems that are in play here haven’t changed much over the years. Police have to respond properly. When women come forward, police have to get it right every single time. And when they don't get it right, we see tragedy over and over and over again.”