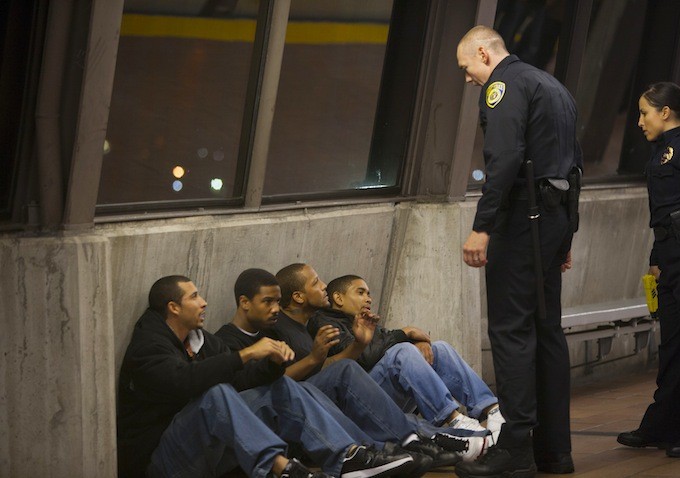 With the police shooting of Toronto teen Sammy Yatim fresh on this country’s mind, the 2008 murder of Oscar Grant as portrayed Fruitvale Station cuts even closer to the bone. It’s written and directed by first-timer Ryan Coogler with a deft, doc-style approach—DP Rachel Morrison uses a muted, gritty palette similar to her work in Sound of My Voice—that follows Grant on the final day of his life. (It opens with one of the many viral videos taken by the commuter rail passengers who witnessed Grant’s New Year’s Eve shooting. The event looms like a cloud.) Casting Michael B. Jordan—who as a regular on Jason Katims’ Friday Night Lights and Parenthood knows from doc-style—is Coogler’s smartest move. Grant was a low-level drug dealer, ex-con and unfaithful boyfriend, and though the movie reaches a bit too hard to show that he was a good guy/father despite that, Jordan’s likability—how he moves with such graceful confidence, can raise and lower his intensity like he’s got a dimmer switch on it—keeps you on Oscar’s side always. When that shot comes, you’ve forgotten that it’s been waiting for you this whole time, and it’s twice as heartbreaking now that Fruitvale Station has made you care.