Titanic fever is sweeping some select tables in Halifax this week. we take a look at two Titanic-themed meals at The Press Gang and Brooklyn Warehouse. 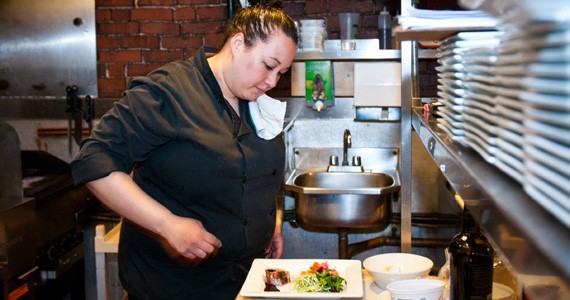 If you live in Halifax, you know all about the Titanic. On April 14, 1912, the Titanic struck an iceberg and sank. Many of Halifax's buildings became ersatz morgues and mortuaries as the bodies came here from what is considered to be one of the worst disasters at sea. Here in this city, we capitalize on our connection to that fateful event. Our museums are full of stories and artifacts, there are anecdotes to be told and even some of our bars and restaurants are said to be haunted by the ghosts of the corpses who filled our buildings.

So how do you take something like the Titanic and make it---no pun intended---palatable? You pay homage through food.

When it was built, the Titanic was heralded as the most luxurious liner in its class. No expense was spared for its first-class patrons and matrons who dined on oysters, lamb, consomme and salmon mousselines. For aficionados, copies of the menu are considered to be a bit of a holy grail of Titanic ephemera---one recently sold for over $120,000.

So what was on the menu? Venture out into a few select dining venues in our fair city and you can find out for yourself.

Over at The Press Gang on Argyle Street, head chef Beth Muise is planning on presenting dishes from the menu during the 100th anniversary celebrations. "We took bits and pieces from the first-class menu, but we're taking them and tweaking them slightly," Muise says. And so instead of oysters with a classic mignonette, they will be presented with a ginger and cucumber ice. For Muise, the menu is not just an inspiration, but a history lesson. "It's different how they ate then," she says. "I did a lot of research, went over all the menu. Their menu was 11 courses!" However, Muise isn't looking to recreate the menu dish by dish, as others are doing---there are Titanic commemorative dinners around the world, including one in the US where the meal is priced at upwards of $1,000, including a tasting of a century old Armagnac that sells for about $400 an ounce. Ouch. No thanks.

But there's no denying that others in the city have Titanic fever. At Brooklyn Warehouse, chef Mark Gray is also mimicking the ship's menu---his will keep the dishes, but highlight local producers including beef from Getaway Farm, lamb from Wood 'n' Hart and oysters from Black Point.

For Gray, the menu is a way to introduce diners to dishes that may now be considered stuffy or passe.

"A lot of these menu items are things you don't see anymore," he says. "It's considered outdated. You don't see Dijon-encrusted lamb with mint jelly."

Perhaps, but that doesn't mean it's still not tasty, or that you can't play with the ideas presented on the menu. Case in point: the sorbet course at Brooklyn will be a cilantro and rosewater sorbet, from Dee Dee's Ice Cream. Instead of finishing the meal with customary cigars and brandy, diners will be served tobacco-infused foams to go along their libations and desserts.

Thankfully, it looks like Haligonians no longer have to worry about being served tragedy when it comes to all things Titanic. If there is one good thing to say about all of this Titanic fever that is sweeping the city, it's this: while making toasts to the ones who made the story so memorable, at least we will be well-fed.

Joseph Laroche and the Titanic

Titanic’s song of fire and ice