The planned Phone Line Blitz is in response to recent conduct from HRP officer. 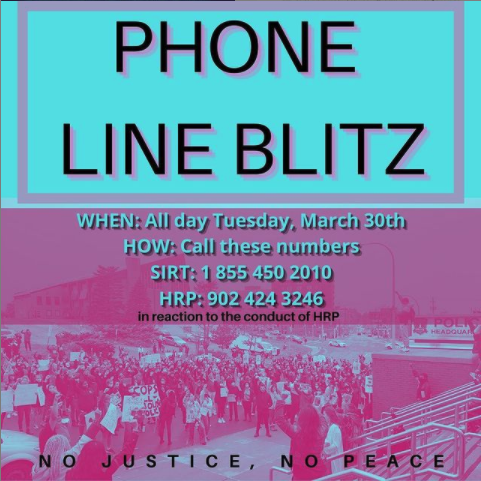 GameChangers902 Instagram
“So, now what? Well. We complain, as a collective. And we make demands.”

On Friday, a video posted by GameChangers902 and Trayvon Clayton showed a Halifax Regional Police officer pointing a loaded firearm at a Black man whose arms were in the air. In the 28-second video the cop is heard saying what HRP has called "unacceptable comments" which sounds like “I will kill you for a fucking laugh,” or "I will fill you full of fucking lead." Neither is good.

The video is a good reminder for the city of Halifax that efforts so far to reassess police conduct are new, and change does not happen overnight. But it also offers a chance to make progress on change, through a campaign of phone-call activism today.

A statement put out by Trayvon Clayton, Kate Macdonald and DeRico Symonds of GameChangers902 says that based on the available information—which includes a second video of the whole incident—”the actions taken by the HRP officer in question is an act of police misconduct and was racially motivated in nature.” In response to the incident, GameChangers902 is organizing a phone line blitz for Tuesday March 30, calling on folks in HRM to tell the HRP and SiRT, the police-oversight Special Incident Response Team, what they think about this kind of language being used by a police officer.

“After the past year of taking the streets (alongside HRP and RCMP who claim to comprehend the issue at hand) asserting and demanding Black Lives Matter...this video certainly doesn’t align with those values,”reads an Instagram post about the event. So, now what? the post prompts. “We complain, as a collective. And we make demands.” With the good old-fashioned telephone. GameChangers902 suggests two phone numbers it would be useful to call:

The HRP complaint line. Calling gives you an opportunity to speak about this incident in particular, or any other elements of HRP’s conduct.

This is the SiRT phone line. Use it to call on Nova Scotia’s Serious Incident Response Team to demand “a transparent, community led investigation into the incident.”

SiRT’s mandate is typically “to investigate all matters that involve death, serious injury, sexual assault and domestic violence...that arise from the actions of any police officer in Nova Scotia.” Based on the available video footage, Friday’s incident probably wouldn’t automatically demand a SiRT investigation—luckily the cop didn’t shoot, let alone seriously injure, the man. In this case, it’s the fifth element of SiRT’s mandate—“other matters of significant public interest”—that would need to be called on to trigger a SiRT investigation.

And a voicemail inbox filled with concerns from the public would definitely help show this is a matter of significant public interest.

Halifax’s police state of emergency: When a pandemic meets a police force with a history of racism, who gets to decide what common sense means?

When Black Lives Matter demonstrations happened around the world last spring, with thousands gathering in Halifax to protest the death of George Floyd and police brutality, the inboxes of elected officials were overflowing. Some Halifax Regional Councillors said it was the most they'd ever heard from the public on an issue, ever. But half of those councillors aren’t on council any more after the October 15 elections, so if you make it through the Phone Line Blitz numbers and still want to have your voice heard—specifically by the folks who will be voting on Halifax Regional Police’s budget very soon—you could give them a ring, too.

This story was updated on Tuesday March 30 with more details around what is heard in the video.