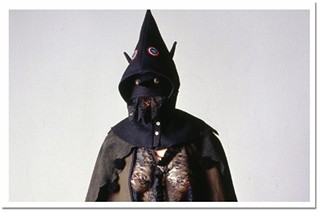 Clothes call Garments by Lydia Klenck are on display at the Anna Leonowens.
photo Davida Nemeroff

The old JJ Muggs in Granville Mall is now NSCAD's fashion studio, replacing bar stools with industrial sewing machines. Upstairs, exposed brick and natural light makes the perfect studio space. This is where Lydia Klenck has been working for the past month as artist-in-residence, designing pieces for her exhibition Garment Works, opening at Anna Leonowens Gallery on June 11.

Curled up on one end of the table is an olive-green velvet blanket beside fabric remnants, sequins and buttons. There's a pile of human hair, courtesy of a friend's cut; Klenck wants to make hair jewellery, a Victorian keepsake of the deceased. The Haligonian-turned-Torontonian is sewing a red satin sleeve on a dismembered forearm that has only two fully formed fingers.

"I'm continuing work I started two years ago, making garments that aren't really functional, trying to make them be seen as sculpture rather than fashion," she says. "Instead of people taking clothing for granted, I wish they could see it in more of a special light, like fine art and sculpture."

Under the label Lydia K, Klenck, after graduating from NSCAD in 2001, made her name designing gorgeously draped fashions from recycled clothing and fabric scraps, vintage in their references to traditional cultures and costumes, and yet modern and refined in their intellectual philosophy and execution. Often compared to Frida Kahlo in spirit, Klenck's clothing is both punk and romantic—corsets, bloomers and capes with pointed hoods make frequent appearances. Right now, Klenck's taking a break from the fashion industry—apprenticing as a tattoo artist, sewing puppet costumes for the TV show Mr. Meaty, making art. And she's happy about it.

Although Klenck was named in the National Post as one of the top Canadian fashion designers to watch, she says, "I don't really want to have to go back to making clothes for a living, it's so soul-destroying. I hated the feeling of having to predict what people are going to want, and convincing them that they want my stuff. And after, when no one cares about you anymore and you're not popular, then you have to come up with some new and exciting thing."

The Anna Leonowens show includes some older pieces, as well as pictures of Klenck in them, taken by Toronto photographer Davida Nemeroff. In one, a lacy headscarf covers her face, except for the eyes—a Klenck signature that keeps focus on the clothes, not the model. A 1950s-style bra is updated with Indian ornamentation and tube-sock gloves, above a sugar-sack hoop skirt.

"I wanted to poke fun at fashion photography and how they exoticize and appropriate traditional and ethnic clothing. And how, in a silly way, there's always some sort of unnecessary nudity involved," she says. "That's not the total point—I wanted to explore my own feelings about traditional costume."

One of her new pieces deals with colonization and how imposed cultural values can alter clothing traditions. Standing on a dress form, topped by a long, black lace headdress with a fur strap to wrap around a chin, a Union Jack flag peeks out from under a stitched apron. Victorian sleeves taper down to about an inch, making the outfit unwearable. She says, "I keep struggling to turn off the thing in my mind that says it's supposed to fit and be functional. I really enjoy the way that clothing looks when it's just hanging on a hanger or on a dress form, because it's very structured and sculptural. There's something ghostly about it."

Living in Kensington Market, Klenck has access to material, discarded by local vintage shops. She fingers a small piece of shiny gold fabric muted by a grayish sheen. "I really like the destroyed quality," she says. "Threadbare pieces with tears or stains already have this interesting patina or history. And then I just push it a little bit further into a garment."