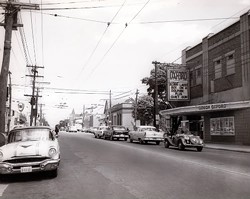 Over a year after the closure of the iconic Oxford Theatre on Quinpool Road, Garrison Brewing Company has announced the landmark is coming back to life. This spring, the longtime brewer will debut a brand-new retail shop and neighbourhood local, The Oxford Taproom in the former Elegant Touch Beauty Salon (6418 Quinpool Road).

"I’m a sucker for old buildings, hence the spot we have down here at Halifax Seaport," says Garrison's founder Brian Titus. "I drive by [The Oxford] twice a day at least. I stopped in to talk to the Nahas brothers because I knew it had been over a year since they’d taken over the Oxford without a plan, other than not wanting to knock it down. I kept going down Quinpool a couple times a day thinking, 'Why can’t a guy get a growler here?'"

The rest is soon to be history. Titus says work is underway on the new space, which will pay tribute to the building's 82-year history as a cinema. The Passport Photo space next door to the theatre (6414 Quinpool Road) will house a beer, merch and pop shop, while the Elegant Touch footprint will house a nano-brewery for experimentation, a small kitchen space and 16 taps pouring up beer and cider. While there'll be some snacks available at the taproom, the Garrison team aims to host pop-up food events and will encourage patrons to order-in from surrounding Quinpool restaurants.

"It's the idea of a local. A social spot for people to walk two, three or four blocks to sit and have a pint and carry on," says Titus. The new Oxford will also boast an outdoor terrace space—dog-friendly with full sun exposure, tucked away from the busy street. "It’ll live and operate like the Seaport location," he adds.

Garrison will take over about 30 of the Oxford footprint, meaning there's theatre space still up for grabs. Titus teases that there could be news of another tenant coming very soon.

"Ultimately, if there hadn’t have been a good fit the people that own it are developers. The easiest thing in the world would be to knock it down and it was literally the last thing they wanted to do," says Titus, who says it's been difficult trying to keep lips sealed about this project. "It’s been hard to sleep at night because it’s such a cool thing and it’s come together really quickly."