The man who made NSCAD, Garry Neill Kennedy, moves on to a new frontier. 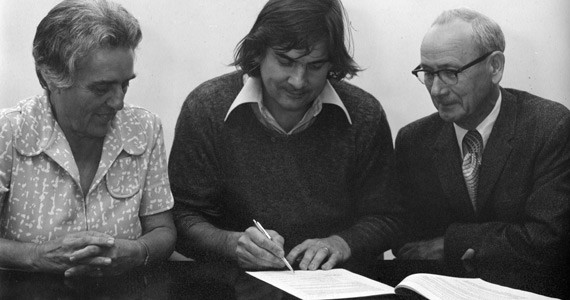 Is it easy to surprise Garry Neill Kennedy? Probably not. The self-described "78-and-a-half"-year-old has seen it all, from his days as the Nova Scotia College of Art and Design president through his long years as university professor and artist. But students from Printed Matter at the University of British Columbia, a course he taught with his wife Cathy Busby, got the upper hand when they threw a surprise party last April.

"It felt really good," says Kennedy. "The first term was over and over half of our students threw us a party. I was really touched. It was the first surprise party I ever had."

It's no shock to hear about Kennedy's students showing their appreciation---he is Halifax's artistic superstar, who turned NSCAD into a top international art school while maintaining a successful career.

Now it's time for the Halifax community to say goodbye. After more than 45 years in the city, Kennedy will move to Vancouver in August to teach at UBC. Two years after Kennedy's 2011 departure from NSCAD as part-time professor, UBC invited Kennedy and Busby to teach, eventually offering full-time employment. Kennedy has no plans to return. "UBC has asked us to be there and there's a draw to stay there," says Kennedy. "We feel good out there."

What's interesting about Kennedy is his humility. He's an artist who started out as a jock. A stellar athlete, he competed in rowing, track and field, basketball and football in St. Catharines, Ontario. "If you're from St. Catharines, you row in high school," Kennedy says. "It was almost a rite of passage."

He played halfback for the Toronto Balmy Beach Beachers and the Niagara Falls Thunderbirds, two early teams in the Canadian Football League, in the late 1950s. After studying at the Ontario College of Art and Design, he arrived at the University of Buffalo in 1961 with a football scholarship and had his bachelor's degree in fine art two years later. He completed his MFA at Ohio University in 1965. "I was inspired to become an artist because, really, that's all I could do," says Kennedy. "I was too small to continue in the world of professional sports so I continued in the world of art."

Kennedy began teaching at Northland College in Ashland, Wisconsin and became the head of the art department. In 1967, 32-year-old Kennedy took the job as president of NSCAD, which had a $60,000 administrative budget. It would be a life-changing decision.

Kennedy's influence on NSCAD can't be overstated. His innovative ideas and energy propelled the school to international acclaim. His hard work, along with the work of faculty, students and artists, was recently detailed in the 2012 book The Last Art College: Nova Scotia College of Art and Design, 1968-1978.

The first major change came quickly. Kennedy immediately accredited NSCAD programs and the school began issuing bachelor's degrees in 1969, becoming the first Canadian art school to do so. By 1975, NSCAD was issuing master's degrees in fine art. Nicholas Houghton, one of Kennedy's best friends, was part of the inaugural graduating class of only three students.

"Garry told me the school was like a medical school," says Houghton, now a faculty member at the University for the Creative Arts. "Med schools have a duty to the people they're teaching and to help the medical community stay on the leading edge of the discipline. He said NSCAD was the same way, that they had a duty to the discipline. He saw the two going together. He wanted to make the art school leading edge."

NSCAD evolved at a rapid pace---it got its name in 1969, the same year the Lithography Workshop was created, a precursor to the Dawson Print Shop. He supported the faculty's idea to move NSCAD to the Historic Properties on Granville Street, a move which took eight years and was completed in 1978. He brought in an array of visiting professors and artists, who could publish thought-provoking writing through the newly created NSCAD Press.

"He liked to give artists space to try things with their equipment," says Houghton. "It was a safe place to do that. Though Garry was connected to the art world, he wasn't into commercial art. So it was an alternative art world. It wasn't a moneymaker. We take it all for granted that universities give a platform to artists."

Throughout his years as NSCAD president, Kennedy continued teaching. Houghton first met Kennedy in his Art Now class as a British foreign exchange student in 1973. "He gave you unconditional regard," says Houghton. "That's very empowering. He was quite quiet and encouraging to others. For example, on the first day of a class, he used to tell everyone, 'You all got 100 percent. Now that's out of the way. Let's start learning together.'"

After 23 years of serving as president, Kennedy stepped down in 1990. He believed school administration became too bureaucratic. "All the MBAs went to work at colleges and universities," says Kennedy. "Having a president teach doesn't happen anymore because there's so much crap to do. You become separated from what the place is about. I would've stayed on longer but I was burned out."

And what's Kennedy's response to NSCAD's tenuous financial situation? "It's very simple to run a school," Kennedy says. "Never spend more than you have."

Stepping away from administrative work allowed him more time to focus on his art. Kennedy is one of Canada's best-known conceptual artists. He's won numerous awards including the Governor General's Awards in 2004 and was the recipient of the Order of Canada in 2003. In our phone calls, one thing is made clear. He doesn't like any labels for his art. "I don't like that term conceptual art," says Kennedy. "All artists make conceptual art. There's no difference. All art stresses ideas. Contemporary art is a weird term too."

Kennedy is known for his political art. He uses signs, colour and text to push boundaries about societal issues and question the status quo. His recent work "THE BIG FIVE," showing at the Emerson Gallery in Berlin, takes aim at the Canadian financial industry. Giant logos of Canada's five largest banks stretch from floor-to-ceiling in a wall painting.

"There's a thread of consistency that runs though my artwork " says Kennedy. "It's about what's going on here in our world. What's this about? That can be as silly as looking at how dark the lead is of a 0.6 pencil to a 2H pencil. Or it can be why are we letting the banks rob us? Why are people getting rich and getting poor?"

As Houghton puts it, Kennedy still has a fire in his belly. This soft-spoken legend is moving forward in his art and his career. His passion will now take him to Vancouver where he'll continue to inspire a new generation of artists.