Shotgun Jimmie comes back east after a busy season of touring 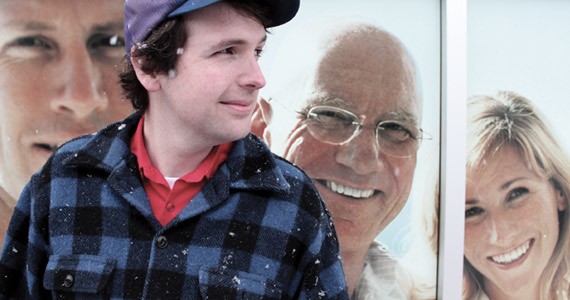 I really identify with The Beav," says Shotgun Jimmie (AKA Jim Kilpatrick), recalling his favourite childhood TV show Leave It to Beaver. "I watched it every day at lunch."

The classic sitcom, which followed the innocent but inquisitive Theodore "The Beaver" Cleaver through post-war suburbia, was a balance of traditional values and welcome change. Despite network transitions to colour, the show aired in black and white, but the focus on American adolescence at the time was novel, if not genius. Like Beaver, Shotgun Jimmie explores a similar dynamic in indie rock.

He plays his unique takes on gold sounds this Sunday at The Carleton.

It's been a busy season since we last saw Jimmers at the Halifax Pop Explosion in October. This winter, he toured Canada, the US and Europe with John K. Samson, played a few festivals with Winnipeg's The Cannon Bros., moved from his long-time home in Sackville, NB to Brandon, Manitoba and recorded new tracks in a rented cabin. But missing the Maritimes, he's coming back east.

"It's business as usual in Sackville this summer," he says, attending SappyFest 7 in the town where he started with smooth rockers Shotgun & Jaybird before going solo in 2007. After releasing two full-lengths and an EP, he put out the heavier, more thematic Transistor Sister last year, which made the 2011 Polaris Music Prize Long List and secured the album's staying power.

"I still feel good about touring it," Jimmie says. "Unlike other albums that were recorded over greater periods of time Transistor Sister was recorded in one shot. It has an overall aesthetic that's pretty obvious so it makes it really feel like one piece. I like that idea." And Jimmie's stage style keeps it current, whether playing with his pals or on his own (as he will on Sunday).

"I've been doing solo shows for a long time and it still feels new. I just had a breakthrough as a one-man band a couple of days ago. It's interesting for me because it's constantly changing and I can change the songs and keep them fresh." The songs themselves can be reinterpreted with every listen. Atop the heavy distortion and the melodic rock jams are thoughtful stories ornamented with clever references. Jimmie's shout-outs range from New Brunswick's auto super-failure The Bricklin to waterfowl parks to Stephen Malkmus.

"I think of them as 'nods,' whatever that is, when I'm writing," he says, "I can tell when people get it, and that's good. Sometimes I think some of the references are completely lost, but I don't mind because they usually serve some sort of poetic function, too." It's true; his songs can take you anywhere. And they're taking Jimmie everywhere. He says it's been an experience living in the Flatlands and the tour with Samson was one of the best professional times he's had. He's been feeling lucky.

"Post-summer, I have a little Ontario tour planned. Then I think I'm going to hibernate for part of the winter and start planning the release of another album. I'm in a really good headspace where I get a lot of work done every day," he says. "Then I can also start planning my next trip."

Jimmie's last few Halifax shows have been pure rock 'n' roll. He's ready to bring subtle nuances to The Carleton. "I'm excited for my triumphant return," he says, laughing. Leave it to Jimmie.