Acceptance and invisibility at the Transgender Day of Remembrance flag raising. 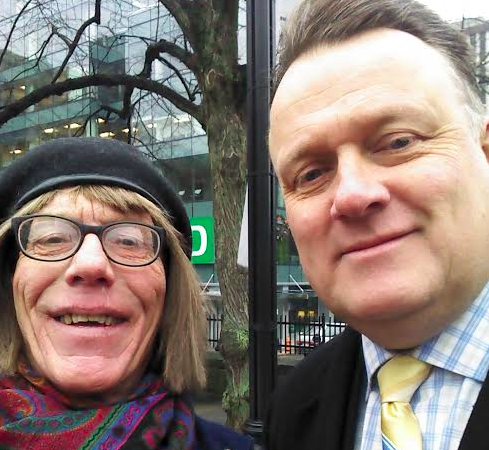 Professionally, I never came out when I came out. I just disappeared.

I couldn’t deal with it. For most of my career, coming out in any way would have demanded so very publicly. I held those kinds of jobs—advocate for people with disabilities, legislative researcher, assistant to a provincial cabinet minister, communications person for a school board. All of with local, provincial and sometimes national media. I held jobs that came, particularly in rural Nova Scotia, with an unavoidable public profile. In my last mainstream gig, I read the news on the local radio station. Despite my deeply closeted trans and an equally closeted subversive orientation, I would likely have been seen as a defender of the status quo. That’s how deeply I hid. That’s how afraid I was.

I still remember the “No Gay Tories” headline in the Herald, about 1985, when some Tory cabinet minister openly mused that the government was justified approaching gay rights and protection of those with HIV from discrimination because, after all, there weren’t any gays in the Tory party. The comment pandered to the doddering, nodding heads of the status quo. It belongs in a class of public policy discourse I call Nova Scotia’s Change Prevention Strategy. It’s founded on “othering,” enacted with isolation and exclusion. It’s fear, in power.

I worked in politics for a competing party that briefly held power, and it’s not inconceivable to suggest that if I’d come out publicly as trans in the early ’90s in that role I’d have been the centrefold in Frank Magazine, obliterating my credibility and career in about five column inches.

When I worked for the school board on the South Shore, the province introduced a new sexual health education resource for middle schoolers that you can bet got read by their parents as well. A couple of years later, I swear, a measurable consequence was that people started giving each other permission to talk about being gay. Before that, it was only a topic for ridicule and contempt, never for understanding or acceptance.

Before Caitlyn Jenner came out, trans people didn’t really register on the public radar either, at least in Nova Scotia. We were effectively blind to the existence of non-binary genders before about the midpoint of the current decade. When I first began living openly, I can’t tell you the number of times city bus riders surreptitiously photographed me, elbowing their seatmate to great giggles and guffaws. Once, two women practically jumped up and down in the aisles, excitedly posting my photo to Instagram. That was six years ago. They’d be kicked off the bus, today. That’s real change.

I’ve changed, too. I’ve had to work hard on myself to move past all the shame and self-hatred I had internalized over a lifetime in the closet, and I still find an occasional dust-bunny where I just swept. I can see how I might have projected all that onto others, assuming they could only misunderstand and dismiss me. I really don’t know where the line lies in my own life between perception of the zeitgeist around me and my own repression and self-sabotage.

I’ve studiously avoided contact with those I knew professionally—politicians, public servants, media reporters. It requires me to dead-name myself to everyone I knew—“You used to know me as...well, now...” It’s tedious.

I went to the Transgender Day of Remembrance flag-raising and proclamation at the Grand Parade on Tuesday morning. Organized by the Halifax chapter of PFLAG, it was sparsely attended. The crowd was so thin, mayor Mike Savage had no choice but to shake everyone’s hand, just to get to the podium.

I was acquainted with the mayor before he entered when his father was premier. I occasionally encountered him when he was an MP, and we always exchanged greetings. He approached me Tuesday morning and it was time.

“Your face is familiar,” he replied. I dead-named, then reintroduced myself.

Then I was Laura to him. Just like that. I took a selfie with him and he seemed perfectly comfortable with me. It made me more comfortable with myself. It occurs to me that’s what acceptance feels like, once you allow yourself to receive it.