Getting the word out

Stuttering doesn’t have to be a shameful secret. 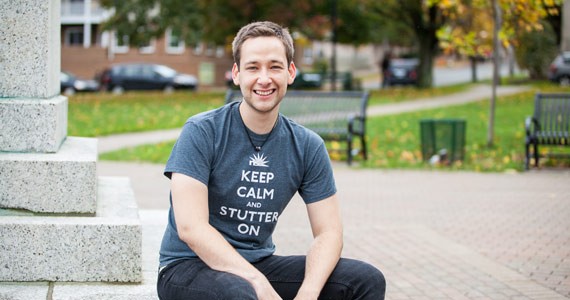 Casey Kennedy began stuttering when he was seven. He knew right away what was happening—but no one else did.

Even as a child, Kennedy would instinctively use techniques like avoidance—not saying words he knew he'd stutter on—to hide his disfluency. The result was that no one believed he had a stutter, even his mother.

"It's actually really sad," says Kennedy. "Because basically what you're saying to yourself—and to other people—is that being fluent is more important than anything you have to say."

Kennedy wishes more people would seek out services like the Halifax Support Group for People who Stutter, which is celebrating its 10th anniversary on Thursday, November 6.

One percent of people stutter, but only about 10 people out of Halifax's 372,000 residents attend the support group.

"It's a very complex communication issue that has a lot of emotional baggage, and a lot of shame and fear attached to it," Kennedy says. "There are a lot of people out there suffering in silence."

Kennedy is taking a master's in speech-language pathology at Dalhousie, spurred by his own struggle.

"I've experienced first-hand how debilitating it can be," he says. "And I also know that there's hope, and I'd like to give that hope to my clients as well."

Kennedy wants to work specifically with people who stutter when he becomes a speech language pathologist—an SLP. But in the three years of his master's program, Kennedy and his classmates have only taken one course on stuttering. He says although everyone has heard of stuttering, it's rare for an SLP to focus on, or even to have a patient who stutters. Not only that, but schoolchildren in Nova Scotia may not get to see an SLP even if they need to.

For adults and preschoolers, SLPs are publicly funded and available through the Nova Scotia public health system. But kids in grades primary to 12 only get access to SLPs through the public school board.

As the Speech and Hearing Association of Nova Scotia website puts it, "The school teams will often determine whether the school board SLP should be involved with your child...Should you have concerns about your child's speech and language skills, tell your child's school about your concerns."

It's up to the board to determine who's involved, which Kennedy says isn't enough. Though most children who stutter begin in their preschool years, some start later—like Kennedy himself.

"I fell through the cracks," he says.

The Halifax Support Group for People who Stutter meets on the first and third Wednesday of every month.

The public is welcome to the group's 10th anniversary, November 6 at 7 pm on the third floor of 1256 Barrington Street. Comic artist Daniele Rossi, writer of Stuttering is Cool, will speak and a documentary on stuttering will be screened.