Ghost Bees play in Halifax this Friday at the Khyber

Say hi before they go on tour again! 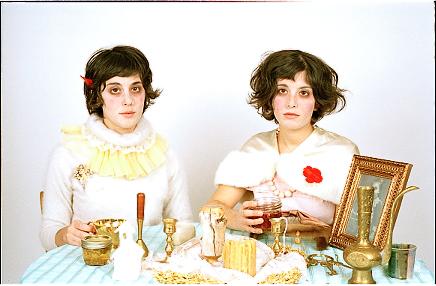 Ghost Bees float back into to Halifax for the summer with a show at the Khyber with Fall Horsie (first Halifax show this year!) and Cousins on Friday, July 24 (10pm). This is the folk duo’s first show this year after touring Europe for a few months and then across Canada with Timber Timbre in June. There aren’t not too many groups in Halifax who have put the pedal to the metal like Ghost Bees, touring near constantly and making multiple trips overseas. Luckily, the pair will get to enjoy some quality lake time before setting out again. “We're here having some time off before we head west again to play at the Regina Folk Festival,” says Sari Lightman. “Also, in August we're doing a tour in the US with feminist music journalist Jessica Hopper and one of our favourite Canadian bands, Katie Stelmanis. Jessica will be doing readings from her latest book. I think it's going to be a really fun and refreshing tour.”

Post fun and refreshment, the group will record again. The intended album sounds completely awesome. “We're going to recording a folk metal album in the fall,” says Lightman. “Which we're super excited about!” As am I!