Attention pupils, this is Local Beer 101: an introduction to navigating Halifax’s homebrews. 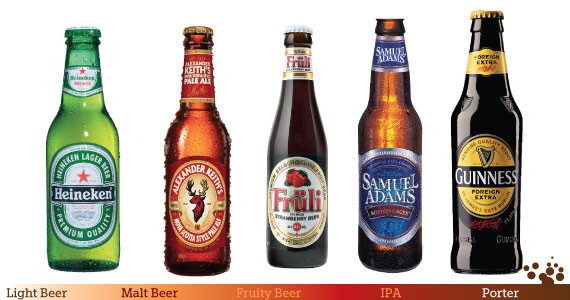 You came here for an education, right? Good, because I'm about to school you on Halifax's favourite subject: beer. From light to dark, hoppy to fruity, it's time to meet your new classmates.

If you drink: Pilsners, lagers and light ales like Heineken, Steamwhistle, Molson 50 and Canadian, Mill St. Organic, or anything that ends with "light"

Here in Halifax, we don't brew anything that is traditionally "light," so even our palest offerings are chock full of flavour and more bitter than your average brew. Your taste buds are going to have to step it up a notch. But if you're new to our craft beer, pilsners and light ales are a great place to start. Lightly malted, slightly bitter and refreshingly smooth, these local offerings will liven up any keg party and please everyone from beer snobs to amateurs.

If you drink: Malty, red ales like Rickards Red, Keith's Red (you get the idea)

Medium, malty ales are the most popular across the board, and most local breweries feature at least one beer that falls into this category. Boxing Rock, Big Spruce, and Uncle Leo's just unleashed their reds this summer, and each has already found a permanent home in beer mugs across the province, while Garrison's award-winning Irish Red has been converting beer lovers to real ale since 1997. If you're not a big fan of bitter beer, stick with reds for a lightly smoky, caramel flavour.

Over my tenure working for a Halifax microbrewery, I countered more than a few people who claimed to "not like beer" by suggesting they try a fruit beer. More often than not, they loved it. Not to say that beer enthusiasts don't also love a refreshing blast of brew berries, but the consensus from purists is to deny these ales the recognition they deserve. I say shame on them! Fruit beers are refreshing on a late-summer afternoon and are the perfect choice for drinkers who like the idea of beer but hate the bitterness.

Now we're getting into serious territory. There's no real domestic equivalent for this type of beer; because of the big brewing companies, the meaning of "India Pale Ale" has essentially been bastardized. If you order "pale" ale at a microbrewery, you're going to have your socks knocked off with hops. Try an IPA or Double IPA and you're basically biting into a grapefruit stuffed with wildflowers. This is bitter beer, true, but it's damn tasty. Halifax is a city of hopheads, and you'll find our collective mantra is "the hoppier the better." Pale ales are often a bit less bitter and lower in alcohol content, while IPAs and DIPAs will put you into a glorious hop coma. For the hoppiest beers in town, try anything at Hart & Thistle.

A general rule is, when the days get shorter, the beer gets darker. Late fall will see a few tasty seasonals emerge from several local microbreweries, but there are some fantastic year-rounds will more than tide you over. From dark ales like Garrison's dark chocolate-malt Nut Brown and Bridge's tasty Belgian dark to the best new stout (in name and taste) in town, Big Spruce's Cereal Killer Stout. If you like dark coffee and chocolate, chances are you've just found your new "usual."

If you DON'T drink: For the non-drinkers (if you're still reading), Propeller and Garrison also have lines of sobertastic sodas---my favourites are Propeller's Ginger Beer and Garrison's Cannonball Root Beer---available all over the city, bottoms up!