I Am Michael is about gay activist-turned-ex-gay preacher. 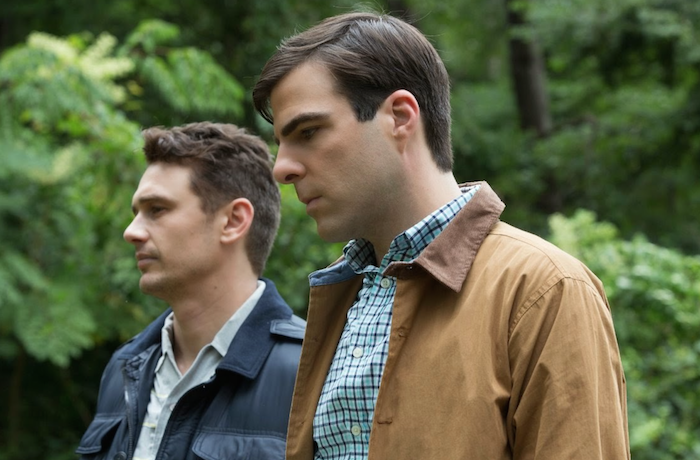 Vanity Fair's Monday report from the Sundance Film Festival has an unlikely Halifax connection. One of the movies VF's Richard Lawson had to undure is I Am Michael, wherein James Franco and Zachary Quinto play a pair of Halifax magazine editors. The Halifax part isn't what makes them Franco-worthy, it's that after launching the publication Young Gay America—and themselves as outspoken gay rights activists—Glatze became born again straight after a health scare and is now a Christian pastor.

At the end of 2002, The Coast celebrated Glatze and Nycum, who back then was always known as Mike, for being awesome Haligonians. The story describes getting Nycum on the phone to talk about his favourite memory from the year:

Nycum calls over to Glatze for inspiration and comes back to the line a minute later. "I know! Of course! When we were doing our documentary this past summer, the very first place we went to was Salt Lake City, Utah, you know very conservative, very Mormon. We had no idea what kind of response to expect. And then we walked into a room of young, gay Mormon kids. There were 70 of them, all there to share their stories." Nycum pauses. "It was wild. Totally outrageous."

Besides the documentary, the pair was working on a book aiming to "change the myth that all young, gay kids are depressed and suicidal," and an art show that was destined for galleries in Croatia and Philadelphia after its Halifax run. YGA the magazine would come three years later, followed shortly by Glatze giving up the gay to become one of those American ex-gay, anti-gay right-wing Christians who are so fascinating for the hairpin turn their lives have taken.

The New York Times wrote about him, and now there's the movie. Reviewer Lawson sees it as more into shaming Glatze than understanding him, and Lawson understands that instinct. But ultimately he thinks the film suffered for it:

Sure enough, as with many of Franco’s myriad creative endeavors, Justin Kelly’s film, about gay magazine editor/advocate turned ex-gay preacher Michael Glatze, is half-baked, a shallow character study that’s really more of a sketch. Franco affects a kind of goofy, flat, aw-shucks accent to play the role, a small, early indication that the movie is secretly interested in shaming, even mocking Glatze instead of understanding him. I get that impulse—much of what Glatze has said and done since his supposed conversion appalls and infuriates me—but that obvious, almost sneering bias makes for an unsatisfying, unenlightening movie.

As for wider release after Sundance, there's no word yet on when or if the film will come out.