The local alt-pop band puts on a light show and lets the zombies out. 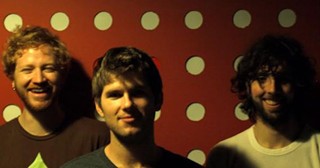 It might seem odd that a CD titled ZOMBIES!!! is a fit summer release, but the members of Glory Glory Man United are just having some naming fun with an album bandmate Adam Warren says really raised their bar in terms of quality. "We recorded ZOMBIES!!! at home, by ourselves, with the exception of the drums, which were done at the Rock Garden...doing it this way allowed us the time to get the takes we wanted to get, to experiment with sounds more and develop the songs to a point we really just couldn't do before because of the expense," he says, adding that Andrew Watt (formerly of The Heavy Blinkers) asked Glory Glory to be the backing band for his new record while they were recording their own, giving the pop band's members "some of the best ears in town to listen to the sounds" of their new CD. Warren says he and his bandmates chose the name ZOMBIES!!! partly because he thought it would be "kind of ironic, because while our songs tend to be kind of dark lyrically, we're a pretty fun and energetic band---which a title like ZOMBIES!!! hopefully suggests." The album's also out on light blue vinyl---making it Glory Glory's first record---and members Warren, Gavin MacLean and Ryan Brown silkscreened the cases by hand. Check out the lovingly wrapped vinyl at their show this week, with Jon McKiel joining them, and the possibility of 3D lighting effects.