God save the queen from the Tattoo 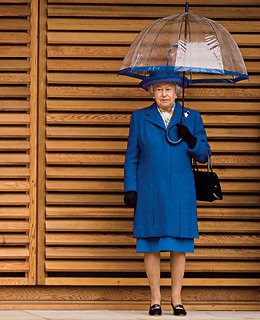 This afternoon we received an email from the Royal Nova Scotia International Tattoo, who are "disappointed that the subject of Her Majesty’s potential visit to the show became public knowledge before all issues could be resolved."

Apparently there have been some royal-sized rumours about why the queen won't be attending the Tattoo during her visit this summer: It was going to be difficult for Beth to get up on the stage because of the theatrical presentation risers they use, which can be dangerous if you haven't rehearsed with them under all the lights, etc. Not because she's old, as was suggested by some people who obviously haven't watched The Queen.

"This is not in any way shape or form an age issue. A large number of the Production Team is well over 60 years of age. This is a safety and dignity issue. The Royal Nova Scotia International Tattoo will not place Her Majesty or His Royal Highness in the position where their physical safety and/or their public dignity could be in any way compromised."

So the Tattoo is doing everything they can now to accommodate and hopefully reverse this decision:

The Tattoo is immensely disappointed, especially on behalf of the younger cast members and those cast members serving in the Canadian Forces and the Royal Canadian Mounted Police, that officials somewhere in the chain of communication between Nova Scotia and Buckingham Palace via Ottawa have decided to block this opportunity. We cannot be certain at what level this decision was made but we do know that Her Majesty takes a great pride in the work of the Canadian Forces, has a great love of military music and as someone who served during the war years, is herself one of the veterans that we salute at every show. The Tattoo hopes this decision can be reversed.

Me too. I want her to sign my Jubilee tea cup.