Going through the (e)motions at Fat Wrecked

I’ll be honest, Fat Wreck Chords predates me. But the legendary punk label's artists were there when I needed them, stumbling into my lap in the form of the Warped Tour 2005 compilation CD. I wasn't allowed to attend Warped Tour 2005, so I was just an angsty 12-year-old with a Discman and a long family vacation ahead of me. The tunes inside changed my life.

At the Fat Wreck Chords 25th anniversary tour at the Cunard Centre on Monday night, I saw seven of the label's artists in action and it put me through a gauntlet of emotions, both positive and otherwise.

I arrived just after toyGuitar began their set as the cavernous Cunard Centre began to fill with people. Hanging out in the all-ages area was magical––the under-12 showgoers were my favourite, decked out in tiny denim vests and too-big NOFX t-shirts.

I was flooded with fond memories of being a tween in oversized band merch and I felt excited for all the kids who were experiencing a punk show for the first time, thrashing, singing along, dancing with joy-some with their dads in tow. Later in the night, some found their way into the pit. All-ages shows are as rare as they are valuable, the few opportunities that minors have to enjoy live music should be celebrated. These kids celebrated.

The absolutely delightful toyGuitar delivered the upbeat rock realness. The fun, surfy vibes of the set were a great contrast to the devil-may-care attitudes of the rest of the night’s acts. Laid-back but never lazy, the carefree set was a perfect introduction to the evening. Drummer Rosie Gonce smiled and smashed her way through the set effortlessly.

Without a doubt, Masked Intruder’s set was the highlight of my evening. If you’re unfamiliar with the band, they’re a campy, gimmicky four-piece that wear balaclavas on stage and sing almost exclusively about robbing people. They have a hype-man in tow, Officer Bradford, whose job is to dress up like a police officer and play the heel, crowd-surf and start the pit.

I ended up on Officer Bradford’s back in the pit before he hauled me up on stage to dance with him to “The Most Beautiful Girl in the World.” Given my fears of both masked men and crowds, it was as terrifying as it was thrilling.

Heather Grant (of local act Crossed Wires) was pulled on stage to sing “Heart Shaped Guitar” with Masked Intruder near the end of what was by far the most energetic set of the evening. Masked Intruder have absolutely hip gyrated, soloed and high-kicked their way into my heart. 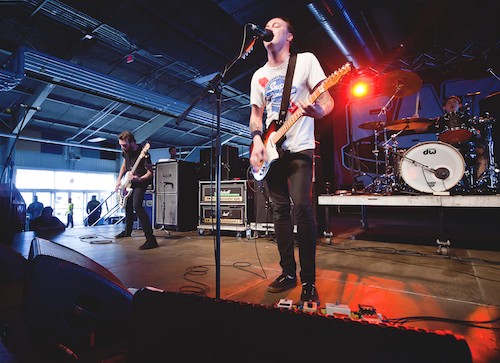 The Flatliners opened their set with an obligatory joke about being young. I was largely underwhelmed with the beginning of the set, hoping for more energy. My prayers were answered, though, when they burst into “Fangs,” a track they released alongside “Resuscitation of the Year” back in March, and it breathed new life into the crowd, ramping up the anticipation as the sound got heavier.

Swingin’ Utters were great. All the uncouthness I expected, their punk rock cred evident in their swagger. They joked about Halifax and Canada as a whole, asking the crowd if Mad Men is even on TV “up here” before launching into an explosive rendition of “Tibetan Book of the Damned.” Their entire set was tight, well-practiced and fantastically executed while their stage show was perfectly unpredictable. Frontman Johnny “Peebucks” Bonnel’s loose and careless movements made it clear that he’s grown comfortable but stayed authentic in the nearly thirty years he’s been performing. 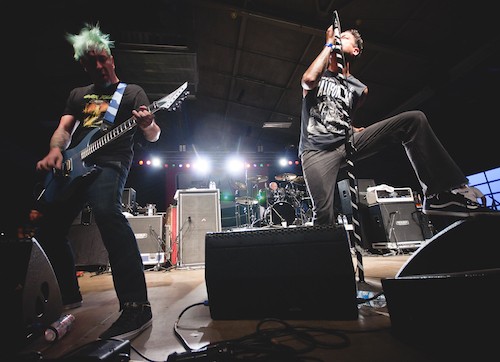 By the time Strung Out took the stage, the Cunard Centre was packed to the rafters with people. The garage doors and large windows in the venue made an interesting atmosphere–because the show took place so early, the sun was not yet set by the time the fifth band began to play.

Strung Out got political, interjecting a snippet of John F. Kennedy’s infamous “Peace” speech between songs, the only real sombre moment of the evening. The bittersweet moment soon passed, and the band burst into a heavy (though a tad clumsy) set. It was largely predictable, and I came away a little disenchanted.

As the sun went down, the Cunard Centre finally felt like a punk venue instead of an airplane hangar. Lagwagon brought swaths of people out of the designated “drinking area” and up to the stage, bridging the age gap of the audience, but also the weird physical gap that existed for most of the show. Between jokes about not condoning drinking and driving but finding it “quite humorous,” Lagwagon slammed out 1994’s Trashed in its entirety, before closing with “May 16.” The room went–to put it gently–fucking nuts. It was absolutely sublime.

As security dragged crowd surfers over the barrier by their ankles, NOFX played The Longest Line in its entirety, much to the delight of die-hard fans. Much to the dismay of die-hard fans, Fat Mike was his usual divisive, inflammatory self. Unsurprisingly, some showgoers took off during his tirades when things got uncomfortable. Though NOFX champion themselves and their music as being anti-racist and pro-gay, making sorry-not-sorry transphobic and racist jokes under the guise of cheeky stage antics is harmful. I wasn’t surprised, but I was disappointed.

I experienced so many things–joy, excitement, terror, disappointment, the dislocation of my shoulder in the pit–and I’m glad I did. The music was mostly great, the audience demographics were wide-ranging and unexpected––at times it felt like a punk rock family reunion. My experience was a ton of fun despite my conflicted feelings, but if I could do it again, I’d spend the whole show up front with the kids having their lives changed.