The busy group behind Staying Underground want to provide nothing but good vibes with regular dance nights, a steady stream of mixes and an upcoming album. 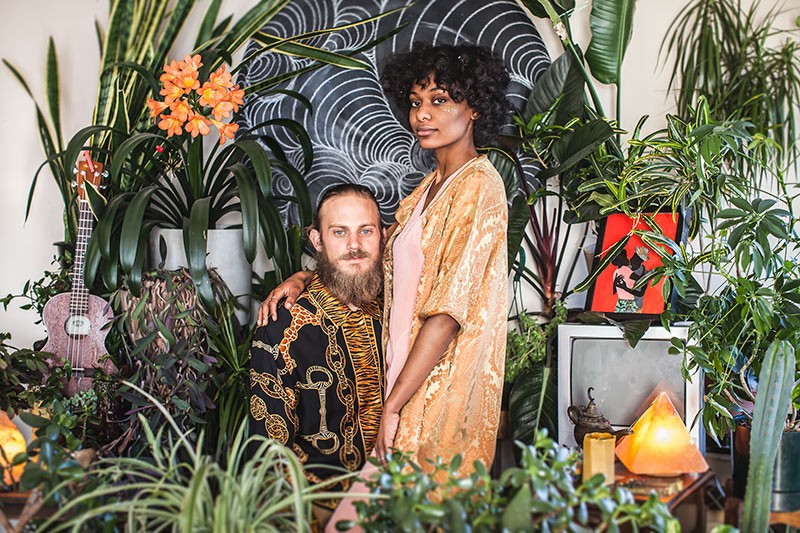 "The best comment I heard was that we're playing music people didn't even know that they liked."

Ten years ago, Thomas Rapsey (AKA Mistah Rapsey) started a music blog called Staying Underground, a place where the avid music collector could make mixes and share tracks he loved from artists around the world. Through these mixes—blending mainly underground hip hop, jazz, funk, soul, electronic, you name it—which now number in the hundreds, he met fellow music lover, creator and polymath Alfie Rapsey (AKA Alfalfa Brown), and if you can't already guess from the names, the two married.

Now living in Halifax, their "place of pivot" for the past few years, the two are putting on regular dance nights and events along with the other third of Staying Underground, audio engineer, DJ and producer Evan Cox.

Neither Alfie nor Thomas are from here—Thomas was born in Scotland, raised in England, Canada and the US, and Alfie is from Baltimore. They met as a result of Thomas's mixes and the surprisingly wide reach that Staying Underground has online. Together they bounced around North America, from Oakland to Montreal, before landing here.

"Someone said, we're not from a place, we're from the internet," says Alfie. "Our collaborators are everywhere, it's so widespread. Right now we want to show the people of Halifax what we can do, we want to contextualize ourselves, there are these pockets of artists all over the city, we just want to get everyone in one space.

"We did get a crash course on politics in Halifax, where it's moving towards inclusivity and making spaces more diverse. I'm glad I can be here when that's happening to be able to just be a physical representation for people who look like me," says Alfie. "It's just about creating a balance."

"I love connecting people and creating a platform for people," says Thomas.

Collaboration is key. Thomas Rapsey has been steadily, prolifically, toiling away in the SoundCloud mines for years, making mixes, collaborating with hundreds of beatmakers, producers and DJs and creating a loyal network of fans and regular contributors—including New York's DJ LotusMoon, Dallas's MissBlk-Amerikah and Richmond's Gideon.

"The main mix series is the Collaborators series," he says. "There are 42 so far. I reach out to different people in my network—they create the first half of a mix and I create the second, building on their vibe.

"That's been a really successful series for me. I got some really good press on it."

Some of that press came from the Questlove-founded Okayplayer site that premiered a mix this month, calling Mistah Rapsey "a new name you should jot down in your R&B rolodex...putting together great sets since at least 2010."

Now, Staying Underground is levelling up, moving toward record label-status. "Basically it's like shining a light on vital music," says Cox. "We just approach music as a spiritual and healing thing, that's what it's all about. It's on an instinctual level. It's been a curating thing with Thomas, but we want to move it into actually putting out comps and supporting artists like a label, as an antidote to some of the superficial things going on in pop music. I've never seen someone as tuned in to what he's looking for as Thomas."

On top of the record label, the three folks behind Staying Underground want to branch out into a radio show on CKDU, to create art films and do more with their artist's non-profit called The Sunroom. They talk a lot about "trying to create an experience", and it's clear that vibes—good vibes—are important.

If you've attended a Staying Underground event locally, you already know that's what makes them so special. With events planned into July, the group puts on parties at The Company House, the Khyber Centre for the Arts and Alteregos Cafe, with upcoming shows at the OBEY Convention, Reflections and Lost and Found. They're focusing on places where "everyone feels comfortable."

They play hiphop, R&B, elemental and instrumental—you might hear funk layered with bass and jazz instrumentals, ethereal soundscapes, lots low end, you might hear Kaytranada, or artists like Mick Jenkins, Smino, Noname. "I want to big up other female rappers and producers," says Alfie. "I play a lot of female-led songs, because if I don't play it I don't know that I'll hear it. And we always try to play a little reggae at the end, to wrap people in the sonic womb. To keep you warm."

"In an underground venue, we can be more influential in shaping the feeling," says Thomas. "A big part is transforming the space so people walk in and feel something different going on." Cox sets up the visuals, most recently screening Brian Eno's 77 Million Paintings. They also bring in plants and nice lighting in an effort to create a "warm feeling."

It's appreciated, and this safe and inviting atmosphere has the magic ability to reset people. Sure, you're going out dancing, and the point is to have fun, but don't expect a meat market, with sugary shooters and general foolishness. Their efforts force listeners to think about the music, and to keep the positive energy flowing.

"It's combined with sounds we play, we aren't necessarily playing for the crowd, but I'm playing stuff you didn't know you liked to bring you into he space," says Alfie. "We carefully select the sounds we play, it's cool to be here and to be respected for my taste. People saying 'I love it—I don't know what it is but I love it.' That's all I've wanted."

"When people walk in the room they are immersed," says Cox. "We want music that is healing, spiritual, transcendent, both the music and visuals have those philosophies in it. That's what it is as a brand, a place for people escaping the harshness of the world and going somewhere non-discriminatory, inviting, beautiful and comfortable."

"At our last party we had kids who were 18 and some over 50, and everyone was vibing," says Alfie. "It's always nice at the end of the night and you turn down music and people start clapping."