Gone with the Unwind

Reviews of three legal cannabis strains that the NSLC files under “Unwind.” 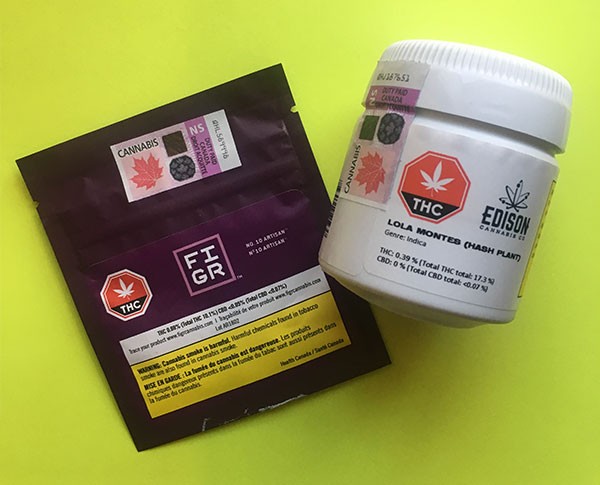 I have had a lot of criticism, eye-rolling and even anxiety about legalization. And still do. Yet I'll admit (from my privileged stance) walking into the Portland Street NSLC and seeing CANNABIS in huge official letters brought tears to my white lady eyes. It happened! It's legal! The stores have an airport-security neutrality about them and the staff, unlike previously suspected, are well-versed on the plant and very willing to discuss THC/CBD percentages, terpenes, strains they themselves enjoy and even wisecrack comments about the over-packaged product.

Morning after legalization, my best bud and I went down to Clyde Street for sativa pre-rolls and a couple strains to get recreational (this involved digging a record player out of the bowels of her basement and singing along with Rumours twice through, and also Cats the musical). Sativa or sativa-dominant hybrids are the daily go-tos in my freelance life, but as the sun sets I'll blend my energizing pot with my sleepytime indica stash or roll up indica hybrids.

Unlike dispensaries or medical licensed producers, the NSLC does not necessarily distinguish strains this way, instead shifting the categorization of cannabis to four descriptive headings based on effect. At the Joe Howe shop there was a decent number of "Unwind" strains to choose from, a category mostly populated by indica-dominant options. I picture a mind unwinding literally, being released from the tension coils of whatever million moments made up the day. Pure indicas are filed under "Relax," and I imagine are more sedating body-high strains. On the NSLC's spectrum of Relax, Unwind, Centre and Enhance, I picture Unwind as evening-social: not an absolute shut-off from the world, but more decaf than regular.

First up was No. 10 Artisan, which comes pre-milled from Prince Edward Island grower FIGR ($8.48 for one-gram package, total price including Trudeau toking tax). The Island LP promises "hand-crafted, sorted and trimmed" bud, and a specialized curing process. No. 10 is rich with caryophyllene and humulene terpenes (organic compounds found in the oil of all plants that give them aroma and flavour). Caryophyllene is found in plants such as clove, rosemary and pepper, and is known for its analgesic, anti-anxiety and cancer-fighting abilities. Basil, ginger and hops house humulene terps with anti-bacterial, anti-tumour and anti-inflammatory properties.

No. 10 was notably the deepest, darkest weed I've inhaled. The smoke was heavy, earthy and exhaled deep berry-tasting smoke. I shared a joint with my partner and a family friend as we cooked dinner. A productive rush of chattiness overcame us, boosting me up from a rainy day of cabin fever parenting. My ability to see what needed to be done (chopping and food prep, adjusting light fixtures for overstimulated comfort levels, navigating bathtime while the others remained cooking) at a time of day I struggle to focus, was brightened. At 10.1 percent THC levels, this boost peters out into a user-friendly manner. FIGR No. 10 would be an excellent choice for anyone who struggles to maintain momentum when crossing the work/home threshold.

My second Unwinding sesh was with Ontario-based LP Up Cannabis. Their indica hybrid 50 hails from the Niagara wine region, grown in a hybrid greenhouse using natural sunlight as an aid ($11.99 for one-gram pack). The flower is hand-sorted and hand cured, and Up's website claims "generally very pampered."

With a THC count at around 12 percent, there is no rush of energy or burst of getting shit done post-50 smoke. Nor was there a super-heavy sedative quality. Pinene and myrcene terpenes are notes found in the Fiddy plant: orange peels, dill and parsley share the piney terp which promotes alertness, counters short-term memory loss associated with THC and whose coniferous notes can act as a bronchodilator. Mango, lemongrass and thyme are sources of myrcene, known for anti-inflammattory abilities pain-relief and sedative abilities.

Up 50 was my partner's pick: his tolerance is low, he enjoys rec toking on an occasional basis only and semi-frequently will therapeutically microdose indica to soothe droning off-the-clock-workplace-thoughts. While away for his job Up 50 has been a perfect pairing for his quiet nights in, practicing guitar and whipping through Salinger novels (because what's a guy to do alone on the road?) The bud provides a gentle and steady high, but its comedown left my partner feeling noticeably foggy and irritable the next day.

I honestly LOL'd when I opened my third Unwind container, Edison Cannabis Co's Lola Montes, to see tiny little rabbit poo nugs inside ($9.99 for one-gram pack). But knowing Edison is the rec off-shoot of Moncton's revered LP Organigram, I held out hope. Their Enhance strain Rio Bravo left something to be desired (spaced me out way more than I like my sativas to, though I maybe oversmoked). Lola Montes, however, is easily my favourite Unwind strain yet.

Thick clouds, white ash, peppery yet bright taste, I shared a joint of this with a collaborator after wrapping a dinner meeting. My brain was feeling zonked post-contract jabber, but the 17.3 percent THC Lola gave us a second talkative wind, gentle elevation and laughs, followed by a dreamy decline into the yawns. Lola overlaps terpene profiles with 50 and No. 10. The latter and Lola also have limonene compounds, as do lemons, oranges and juniper. This terpene can elevate moods while aiding in stress relief, and has antifungal and antibacterial properties as well.

Lola's stimulation burst isn't as intense as No. 10, and the mellowing out is a serene slow down. I smoked my roach with coffee the next morning, and had the most fun and easy time getting the family dressed and out the door.