Why are we not Halifaxians? The truth is very Haligonian 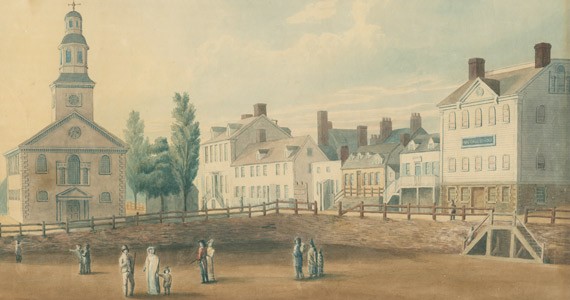 Newcomers to the city are confronted by a number of uniquely Haligonian customs: boats on wheels cruising the streets, lunch breaks being celebrated by the firing of cannons and giant, ancient-looking churches situated on what seems like every other block.

"When we came to visit four years ago, we were like, 'Halifaxer?' 'Halifaxian?'" says Kevin Ochal, a graphic designer who moved to the city last year so his longtime girlfriend could attend Dalhousie. "The term 'Haligonian' is pretty rubbish."

Jennifer Lambe, co-chair of this year's Hal-Con, had a similar experience when she relocated to Halifax from Ottawa eight years ago. "My in-laws helped us move into our first apartment," she says, "and they asked me how it felt to be Haligonian. I wasn't able to really give them a proper answer for a month. I referred to myself as 'Halifaxish' before I moved here."

But why is it Haligonian and not Halifaxian? Unfortunately, there are few experts in demonyms (names of residents of places), but certainly we can find answers somewhere in the city's namesake: Halifax in West Yorkshire, England.

"I've lived here all my life and never heard of the term," says Peter Leng, information assistant at the Halifax Visitor Centre. "I'm afraid nobody seems to know," says his associate Richard Fox, head of marketing at tourism company Hello Yorkshire. "My own theory is that lots of collective nouns for cities use the first or first and second syllable with a collective ending that rolls off the tongue: 'Mancunian' for Manchester, 'Yorkie' for York, 'Glaswegian' for Glasgow. Of course, this doesn't explain using 'Brummie' for Birmingham."

"So the derivation 'Haligonian' is a regular demonym based on the mistaken etymological root 'halig,'" says Elissa Asp, associate professor and linguistics coordinator at Saint Mary's University. "It seems to have resulted from a 16th-century mistake."

(Take that, Haligonians from 500 years ago.)

Despite these revelations, some argue that there's no need for widespread demonymic reform.

"This is the basis of any culture, that we accept traditions without seriously questioning where they originated or what they mean," says Corey Slumkoski, a history professor at Mount Saint Vincent University. "There are other things that could be considered---Halifaxer and Halifaxite, for example---but Haligonian is entrenched in the social fabric of the city. Any attempts to change it, I suspect, would prompt people to vigourously defend the traditional name."