It’s been a year since Full Moon Tiny Shelters built its first teensy home, and since Dawn Higgins has been living in it. 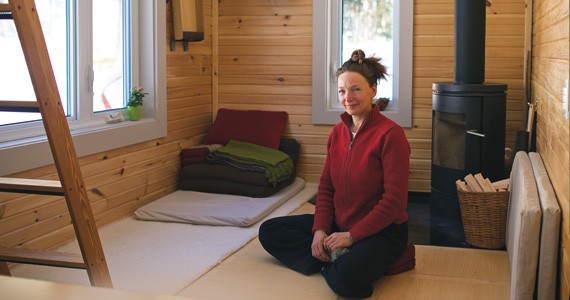 “Don’t you want to build me a tiny house?” Dawn Higgins said it half-jokingly to her friend, woodworker and solar design enthusiast James Constable, at a birthday party in the summer of 2013. The former owner of Mahone Bay’s bookstore/cafe, The Biscuit Eater, had just returned home after a year of travelling and she was actually looking for a place to live. But she didn’t think a little party banter would lead to not only a new home, but a booming business.

“A mutual friend of ours told us, there’s a market for this, and people are going to care about it,” says Higgins. “I wasn’t working, James was sick of building massive houses that two people live in for four months of the year—it all fell into place.”

Together Higgins, Constable and his wife Jennifer started Full Moon Tiny Shelters, a company dedicated to simplicity, quality and proving that size isn’t everything.

The first project was the Harmony House—an eight-by-20-foot structure attached to a trailer that Higgins would call home. Built at Constable’s off-the-grid workshop, powered only by the sun, lots of natural light and smart storage were two major considerations in planning and building the shelter. It operates a lot like an RV or boat would, with a composting toilet, a water tank and a grey water holding tank, but is winterized so that it’s liveable all year round. In the meantime, people were taking notice. 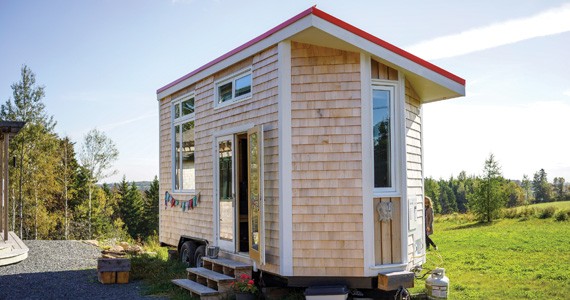 “I couldn’t believe that people were coming to us thinking that they’d be good for them. They had ideas for mediation rooms, yoga rooms and guest rooms,” says Higgins. And to their surprise, many of Full Moon’s requests have been for tiny full-time residences, just like the Harmony House, which Higgins has been living in since last spring.“I just found it freakishly liberating,” she says. “It has been really incredibly interesting. Things I thought might make me crazy haven’t been an issue at all and actually I can honestly say I’ve had no challenges with it. This kind of small living, it dictates a certain level of consciousness that I really am appreciating.”

If there’s any way to break in a new home, it’s surviving a winter like this past one. But Higgins’ woodstove and solar panels haven’t let her down. As she searches for a permanent home to park Harmony, she’s spent the last two seasons parked on friends’ properties near Mahone Bay. Starting a tiny home community is another idea brewing with the busy Full Moon team.

Higgins says she sees the current obsession with this minimalistic living is two-prong—it’s an escape from machine mentality, and a portable, pretty no-nonsense way to live: “I think we’re ready for something much more enchanted, something that reminds us of our childhood, something that’s alive and organic and then on another prong it’s just incredibly practical. People are overwhelmed with debt and work and schedules and it’s a way to get out of some of that bondage.

“It is a great thing for some people. I’m under no illusion that this is for everyone,” she says. “I have no dogmatic ideas that everyone should live like this, but for those who like myself are very happy to live in a mindful, intentional way and be small—it just lends itself to that.”

Find out more about Full Moon’s small but mighty homes at fullmoontinyshelters.com