Every year Dalhousie University awards its Varma Prize to English students who compose original works of gothic fiction. The award is named in memory of Devendra Varma, former professor emeritus at Dal and a former  vice-president of the Vampire Research Society. For your horror this Halloween, the Midnight Society once again proudly presents, in order, last year’s third, second and first-place winners. Read them, if you dare...

She was on her way to class. She lit a smoke as she walked, the first of the day, and closed her eyes for a moment as she took a drag. She exhaled and watched the smoke billow around her. She felt the beginnings of a head rush. She smiled. She glanced down at the cigarette between her fingers, flicked the ash to the ground.

And then a hand yanked her back.

She was in the room again. The light was white, cold, flickering. She clutched a scratchy blanket around her. She was shaking. She looked down. The chair she sat on was chained to the floor. The walls were pale grey with scratches all down one side, as if the previous patient had tried to claw their way out. The door was locked. She knew that. She paced the room. She realized that she had dropped the blanket. She tried not to look. But then she was looking. Her wrist was bandaged in fluffy white gauze but she could see the blood. As she watched, it ran down her fingers and dripped onto the linoleum, each drop a crash in her ears. She tried to make it stop but it gushed faster and faster, pooling at her feet. She closed her eyes but she could still feel it—hot, sticky, rising. She shuddered, felt a cry rising in her throat.

And then she was back on the sidewalk. She swallowed. She kept walking.

The red bladed axe came down with a sick thud and the man’s stomach grumbled. He knew he had to finish working before he could go in to eat but the work was slow. The blade  arced through the air, reflecting some of the low moonlight, before crashing down once more.

As the man worked he couldn’t help but feel uneasy. He would stop periodically and peer out into the surrounding darkness. Was he being watched? As a chill crept up his spine the man attempted to hurry through his work.

The man was tall, clearly well equipped to swing an axe such as his. Though, he had never considered that this would be the type of work he would do. He raised the axe once more.

The man spun, the sound of a broken branch alerting him to something in the distance.  He silently looked out into the woods beyond. His fingers clutched the wooden handle and his breathing stopped. Something moved within the darkness.

A deer bounded off into the black. His axe dipped slightly as the man let loose a low sigh and regained his composure. Glancing around, the man turned back to continue his work.

He looked down at the face of the man he had been working on; a face forever frozen in pure terror. Smiling, he raised the axe once more as his stomach grumbled. He knew he couldn’t eat until he finished his work. 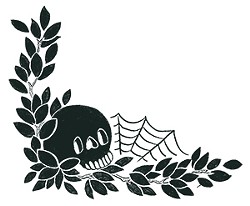 As Long As We Both Shall Live
by Claire Bennet

I run through the dark forest, the letter gripped in my fist like a weapon. My heart pounds, whether from fear or exertion I do not know. I run, and run, and run.

To my love, the letter began, have you missed me?

A sharp crack, my head whips around.

It will not be long until we are together again.

I stumble over fallen branches, scratching my hand along a tree’s rough trunk. My stinging palm urges me forward.

I promise never to leave you again.

Quick, hollow thundering is in my ears. My heartbeat? Or his footsteps?

Yours truly, and forevermore.

I reach a break in the trees. Before me is a wide field, littered with gravestones. I rush through the fog, my hair sticking to my face like a creature crawling over me. I fall to my knees before the stone that bears his name. A date from three years ago is inscribed along the bottom.

Hands shaking, I unfurl the letter from my hand. I squint through the mist to read the top of the page, reading once more what is already burned into my memory.

Yesterday’s date screams at me in his familiar handwriting.

His laughter rings in my ears. The letter falls to the ground as his cold hand touches mine.