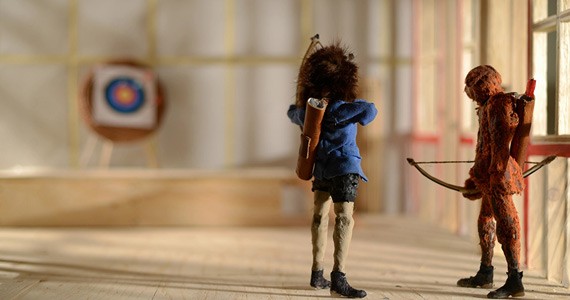 Graeme Patterson has returned to the Art Gallery of Nova Scotia with Secret Citadel, a mixed media installation that's an ode to male friendships, nostalgia and growing up. The title refers not to our city's historic mound but to an early incarnation of the Fortress of Solitude, Superman's headquarters. In the centre of the dark gallery sits a large mountain atop a table, a central piece surrounded by three large scale sculptures. Each work houses elaborate sets: a summer camp, a high school gym, a tavern and inside the centre mound an idyllic studio containing versions of the exhibits' other scale sculptures in miniature. Flanking the mountain are two dollhouse-sized homes, one Patterson's childhood home and the other for childhood friend Yuki, a recurring character in Patterson's work. At the exhibition's artist talk Patterson describes the mountain as being a place of the male bonding experience---"a place where secrets are left...a kind of fort. Secret Citadel is that for every one of these pieces."

The four sculptural worlds coalesce in a 30-minute animation that chronicles the boys' friendship as they grow up, come of age and drift apart. The two friends also present themselves as mascots---an orange cougar and a blue bison---who first appeared in Grudge Match, a piece familiar to AGNS-goers and an early work in this series. The two characters groove, tussle and compete all around the gallery, in many pint-sized animations planted in sculptures and larger-than-life wall projections. The avatars change to suit the narrative, with the baby cougar/bison, half- adult human/half-animal, and every conceivable incarnation in between, interacting with each other or fatefully alone throughout the landscapes. The seemingly endless self-referential narratives link back to the central mountain where Patterson is seen working on the pieces, hanging out and trying to repair the life line broken between Yuki's home and the Citadel.

In the back corner of the gallery is a flaming head-on collision between a school bus and sedan, stationed between two charred bunk beds that house Camp Wakonda on top bunk. Here the boys battle with their animal alter egos, with each other, and with rebellious juvenile temptations. The hum in the gallery produced by the many miniature animation soundtracks is suddenly buried when someone puts a loonie into the player piano, prompting the ghostly keys to begin an original score by Patterson. On top of the piano is a tavern whose windows contain animations of the adult sized avatars, and they also flank the piano in two life-sized projections of cougar and bison jumping on lone trampolines, like video game characters in the selection screen, ready to play if asked.

"I realized it wasn't just about Yuki," says Patterson, "but the friends I've had throughout life." Patterson describes living with fellow male artists as he worked on Grudge Match: "Just being in that situation made me feel like a kid again, always having these constant male bonding relations. I realized how important to me that is, day in, day out. Some of it's true, some of it's kind of a little bit skewed, a little bit fiction---I tend to do that with my work, some of it's bullshit.

"I've always envisioned my narratives as being dreamlike in that way," says Patterson. "I like the freedom to throw nonsense in once in awhile."