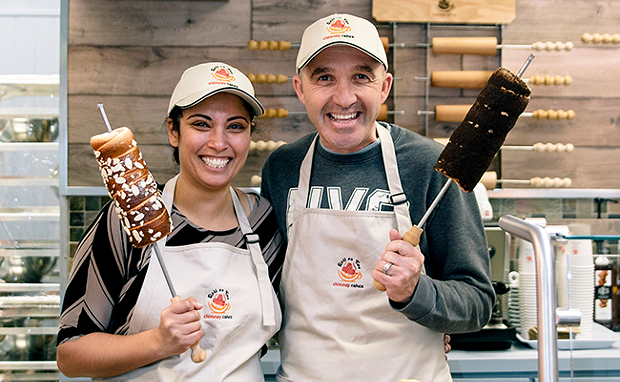 "It's a very eye-catching process," Andrei Paunescu says, explaining what exactly a chimney cake is and how it's created.

He's not lying. Taking in the making of the sweet Hungarian pastries—also known kürtőskalács—is just as fulfilling as eating one of the hand-spun, spit-roasted, golden tube cakes.

Andrei and his wife Orit opened their little chimney cake bakery, Roll On Two, quietly on Granville Street last Friday, serving up Illy coffees alongside their signature desserts from a tiny, fragrant nook of a space.

"They're very popular in Hungary of course, and all over Europe," says Andrei, who was raised in Romania, and lived in Israel before moving to Halifax with his family two years ago. "I'm coming from the construction industry, but opening a bakery was always my dream and I said one day I would do it. It's something very special."

For the past year he and Orit have been spinning cakes at home, experimenting with various flours to crack the code and make the perfect recipe. Eventually they imported the ingredients and tools needed to keep the texture and taste authentic. 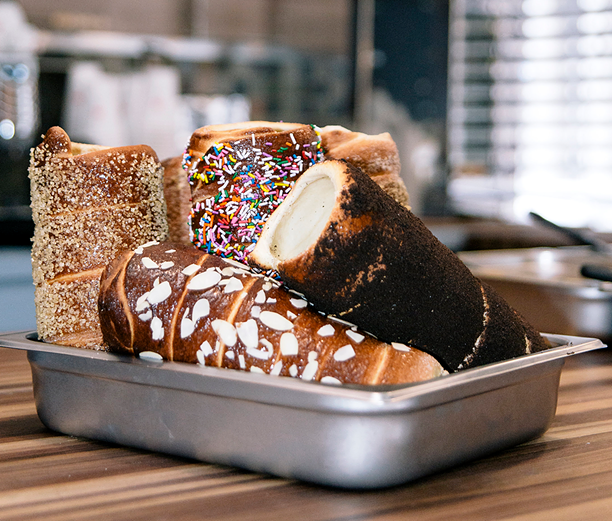 While traditionally chimney cakes are cooked over a charcoal grill, at Roll On Two they bake in minutes on wooden spits in a rotisserie-like oven. The result is a crispy-on- the-outside, fluffy-on-the-inside scenario, the yeasted dough puffing up to take on a texture that falls somewhere between croissant and cinnamon bun.

"And it smokes like a chimney," says Orit, carefully pulling a fresh-baked cake from its spit, steam shooting from its hollow centre—a perfect vessel for soft serve, which the Paunescus promise will eventually be a reality.

For now, they roll them in a variety of sweet toppings—cinnamon, brown sugar and walnuts, Oreo, almond, coconut and sprinkles included—and hope to add savoury options, like cheese, bacon and olives, to the mix.

"I remember during my childhood waiting 20 minutes for one," says Andrei, of the pastry's nostalgic aroma, which could and should be bottled and sold. "It reminds me of my mom."