In other parts of the world growing things on rooftops has proven to be a great environmental benefit. The research on how they could benefit us is being done right here in Halifax. 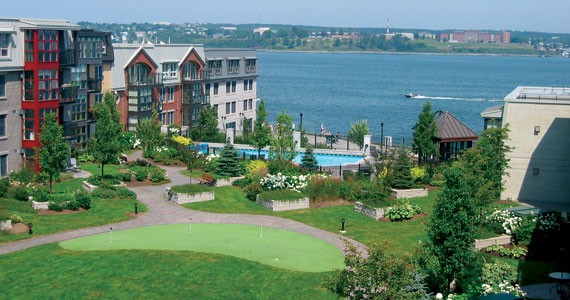 Green roofs are not new. They’ve proven to be a huge hit in Germany, where an entire industry has shot up around the environmental and economic benefits of covering your roof with living plants. Beyond the extra insulation providing energy savings to the home or office it grows above, a green roof limits storm water runoff and increases biodiversity in the community by giving vegetation and insects a place to flourish. It was in 2008 that the roof above the Patrick Power Library at Saint Mary’s University was retrofitted with greenery. Now a second one has been planted on the top of SMU’s Atrium building. Both are research facilities to help understand how Nova Scotia can benefit from living roofs on a broader scale.

Jeremy Lundholm, an associate professor of biology at Saint Mary’s who is overseeing the two roofs, reports that the HRM and Halifax Water are very interested in the possibilities of storm water capture. “The reason people’s water costs are going up is because we’re now paying to treat it. At some point there should be an incentive for people who are mitigating the storm water that comes off their properties.”

Lundholm says green roof incentives are being set up specifically for storm water management in a lot of US cities that are seeing more intense storm seasons, where peak storm water flows are exceeding their systems’ capacity to deal with it. “Green roofs are just one solution,” he says.

There are two kinds of green roofs: intensive and extensive. The former, generally means any green roof with six inches or more of substrate or soil---any kind of growing medium. Extensive is anything six inches or shallower.

“Extensive roofs are much cheaper and require less maintenance, but the plant palette available is much smaller,” explains Lundholm. “Basically, plants have to be able to survive extreme drought, depending on the climate, to make it on an extensive roof.”

Lundholm’s research focusses on the shallower, extensive roofs---the two at SMU are extensive---because the assumption is that there are a lot more building owners who are going to afford to put on an extensive roof rather than an commit to the maintenance and even structural reinforcements an intensive roof would likely require. It’s all still fairly new technology in Canada, especially in this climate, which is why Lundholm’s research is so important. If it shows a positive environmental impact and energy savings, it could be the kickstart to get a green roof industry here.

“The benefits are there, but one of the things that are not known is how long it takes to pay off a roof in a given climate,” says Lundholm. “Those analyses have been done for certain places but we’re still gathering data now that are going to help put together the cost benefit analyses for Atlantic Canada. We think the winter benefits are going to be pretty extensive.”

Green roofs can be planted on sloped and flat roofs. They can be useful even if the plants only cover part of the roof. Halifax has a large number of flat-roofed buildings, industrial or institutional buildings, that could benefit the most from growing plants.

“We have no performance data for any of the roofs, besides the ones at SMU,” explains Lundholm. “Most people do not measure how well the roof is actually working.”

That said, there are a few great examples of green roofs that are certainly benefiting both the edifice and the community. A few are private, though some are visible from the ground, such as the green roof on Citadel High, which you can see from the Hill.

“Some of these have been around for 20 years. They weren’t put there because people cared about the environment,” says Lundholm. “They were put there because it was a wasted space and people in apartment buildings wanted somewhere to put their barbecue.”