Greeting cards at the holidays

Mail bonding: The tradition of greeting card-giving at the holidays is still alive and well in Halifax. Here are all the details on how to do it and do it well. 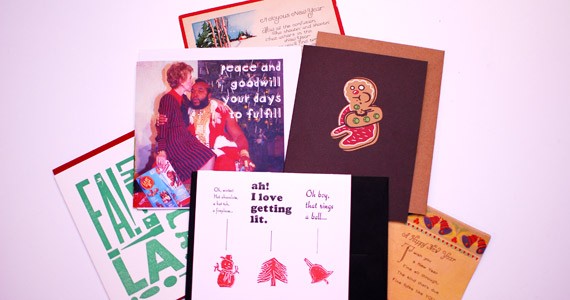 Dearest Coast readers, both holiday junkies and haters: In case you didn't know, holiday greeting cards are still a thing. Despite our tendency to lean away from paper by sending mass emails, ecards, Facebook shoutouts and holly, jolly hashtags, the corporate card biz is still doing OK.

The roots of handmade messages of good cheer are traced to ancient China, early Egypt and 15th century Europe but they (the greeting card historians) say that the first official Christmas card popped up in 1843, when Henry Cole commissioned artist John Callcott Horsley to design holiday hellos.

Since then the greeting card industry has crept very near to the epicentre of commercialized traditional holidays. Of course, that's not to say people aren't getting creative. You, senders of the token family holiday card---the one where you and your pet wear matching sweaters and stare off into the distance as the fake stars of the fake winter sky shimmer behind you, you get points for trying. And a bonus point if you're doing this ironically.

The same goes for those of you who've sent the "holiday letter," that family update typed out on festive printer paper that addresses no one directly and gives a deep reflection of what 2011 brought for the Smith family. ("Robert won every sailing race this summer and Katherine's braces are just about ready to come off!") While I'll be the first to admit it's more about the message you're writing rather than what you're writing on, during this wintery holiday season, Hallmark and the other card bigwigs are sipping on egg nog and capitalizing on our nostalgia alongside those Coca-Cola polar bears. Halifax has got the goods when it comes to sending beautiful, wacky and weird holiday cards.

For cards so gorgeous they can double as gifts head to Inkwell Modern Handmade Boutique & Letterpress Studio (1658 Market Street, 405-8309). Here you'll find quirky (and local!) festive cards worthy of a frame. Inkwell's owner Andrea Rahal says so far most are buying boxsets which means the serious card senders know what's up. And if you'd like to brush up on your penmanship, or letter-writing etiquette, just in time for prime card sending time Inkwell, City Mail and Varity Concert are teaming up for a night of mail art tonight (Thursday, December 1 from 6:30-8:30pm).

And in case you're not done swooning over locally handprinted cards you might as well swing by the handmade heaven, also known as the Halifax Crafters Winter Market (December 3-4, Olympic Centre, 2304 Hunter Street, 11am-6pm) where Inkwell's friends The Letterpress Gang will tempt and inspire you.

The city's longtime stationery experts Duly Noted Stationery (1459 Brenton Street, 446-5606 ) can also fulfill the needs of your holiday card list; it's the perfect spot to find something for that friend who appreciates random, and sometimes blatantly cheesy, holiday humour. (Who says Mr. T isn't a festive dude?)

If you're thrifty or curious, and your holiday card recipients are a little kooky, borrow from the mailboxes from days of yore. As long as you're willing to put some time in, many antique stores and odd-shops have a trusty little box of vintage cards tucked away, full of weird and wonderful greetings. Try picking through postcards at Finer Things (2792 Agricola Street, 456-1412), Urban Cottage Antiques & Collectibles (1819 Granville Street, 423-3010) and The Monkey's Paw at Plan B Merchants Co-op (2180 Gottingen Street, 406-1254). Among images of vintage sunbathers on the beaches of Florida, tacky but glorious '80s Citadel Hill shots and random nature scenes from Yellowstone National Park, you'll find the strange, and sometimes creepy, holiday-specific cards. Many of them have never been used and will cost you only a buck or two.

Whether you're hyped for the holiday season or not, this is an excuse to remind those faraway friends you're thinking about them, while supporting local business. The fact that snail mail has become a bit of a novelty makes those on the receiving end feel even more special. Tis the season of ye olde greeting card---embrace it.