Judge refused to declare a mistrial when the accused became his own lawyer. 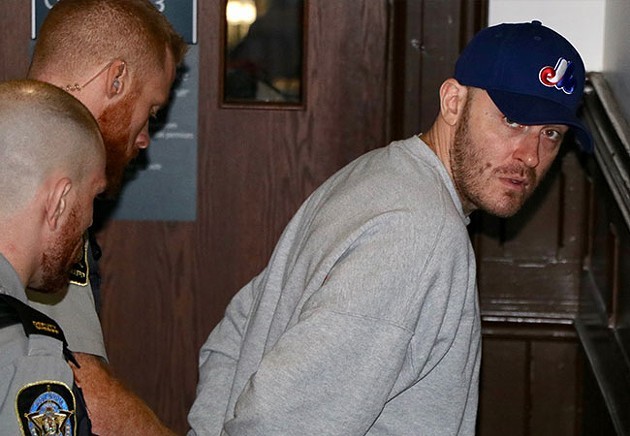 Jimmy Melvin got a not-guilty verdict at a murder trial earlier this year, but today he was convicted of trying and plotting to kill.

A Nova Scotia Supreme Court jury in Halifax on Thursday declared James Melvin Jr. guilty of attempted murder and conspiracy to commit the murder of Terry Marriott Jr. The charges stem from an incident on December 2, 2008.

Prosecutors said that’s when Melvin rounded up his friends Jason Hallett and Regan Henneberry to head over to their friend’s house, where Marriott was visiting. Cops arrived in time to circle the house and block Melvin’s plan. But after only one night sequestered and a few hours of deliberation, the jury agreed Melvin’s intentions were clear.

Marriott Jr. was shot to death two-and-a-half months later. In June, Melvin Jr. was acquitted of first-degree murder for that crime.

Today when the verdict came down, those close to Marriott dabbed their eyes, and the sound of stifled crying came from the middle of the courtroom.

The conviction seemed to bring closure to members of the Marriott family, who had expressed anger after the acquittal this spring. Those who knew the victim seemed relieved and happy, chatting loudly about other topics before leaving the courthouse.

Melvin, on the other hand, reiterated his claims of innocence. “I’m not a crybaby. I can take one on the chin, even if I never did it,” he told the judge. “I’m at a loss for words right now.”

After the verdict came down, judge Peter Rosinski “strongly” encouraged Melvin get a lawyer before he was sentenced, adding, “the decision is obviously his.”

That’s because Melvin fired his lawyer on September 21, and spent the end of the trial representing himself in court.

It was a far cry from how Melvin’s dad, James Melvin Sr., seemed to expect things to go.

“That’s it…it’s a mistrial!” he said as he walked out of the courtroom, according to Crown attorney Richard Woodburn.

“I just don’t feel I’m being adequately represented,” Melvin Jr. said to Halifax Supreme Court Justice Peter Rosinski the next day. It wasn’t a personal slight against defense attorney Patrick MacEwen, he said: “I like Mr. MacEwen as a person. He’s got nice hair.” In hindsight, however, Melvin thought he would have been better off getting a lawyer from Toronto.

Only months ago, MacEwen had represented Melvin Jr. in the murder trial where he was acquitted of all charges. It was the kind of thing that, one would think, might engender trust between an attorney and his client. Nonetheless, there had been “a breakdown,” MacEwen told Rosinski, shortly after he had been fired.

“It’s a bit of an uncomfortable situation sitting here, frankly,” MacEwen said in court the next day. “This has never happened to me before.”

The Crown said Melvin’s unexpected decision was the latest in a long list of Melvin family “shenanigans” at the trial. Earlier that week, Cory Melvin—Jimmy Melvin Jr.’s brother—had been admonished for taking cell phone videos of civilian Crown witnesses as they spoke to the police—also witnesses—about scheduling. Melvin Sr., meanwhile, was accused of “intimidating” witnesses by saying “Hi” to them on their way into the courtroom. “It was not a friendly greeting,” said prosecutor Christine Driscoll.

Now, they pointed the finger at Jimmy Melvin Jr., and suggested he was trying to create the conditions for his case to be thrown out.

“It seems like this was engineered,” prosecutor Richard Woodburn said, “to frustrate the court process.”

Over several days of trial, the Crown and its witnesses described the murder attempt as a long, meandering quest. Hallett said that he met Melvin in a Spryfield building and they jumped out of a window to avoid police. After multiple rides from friends and a muddy, Valium-fueled hike through the woods, they ended up at their buddy Wacko’s.

Their friend Vanessa Slaunwhite said she drove them on the final leg to Wacko’s house. They were covered “in mud.” They asked her to pick up some cocaine at their friend Derek MacPhee’s house. She did. At some point she picked up her friend Regan Henneberry so that he could be “a comfort” to her at Wacko’s, she said. The group was talking about “hurting Terry in some kind of a way.”

Slaunwhite left. But not before she drove back to Derek MacPhee’s house—where Marriott was visiting—to pick up some more cocaine and tip them off that Marriott was in trouble. Henneberry says he was with her. “Get him out of there,” he told MacPhee, according to his testimony. “[Melvin’s] coming back in 20 minutes.”

Next, Henneberry and Hallett say they loaded up another friend’s car with two guns and drove back to MacPhee’s with Melvin. “Lil’ Jimmy” was riding shotgun.

MacPhee called police. One detective who spoke with MacPhee told the court that the professional criminal’s voice was “out of character”—panicking, anxious. They sent out cars to surround MacPhee’s house and protect Marriott. Melvin’s plan was thwarted.

When Marriott later died in February, he had been sleeping off a night of partying. Someone shot him five times in a friend’s basement. Prosecutors had charged Melvin of first-degree murder in that case, accusing him of riding with MacPhee—the same guy who called cops to protect Marriott in December—on an ATV and shooting the victim in cold blood. In May, the jury declared Melvin not guilty. Melvin went back into custody, where he is currently serving a sentence for a drug-related offense. 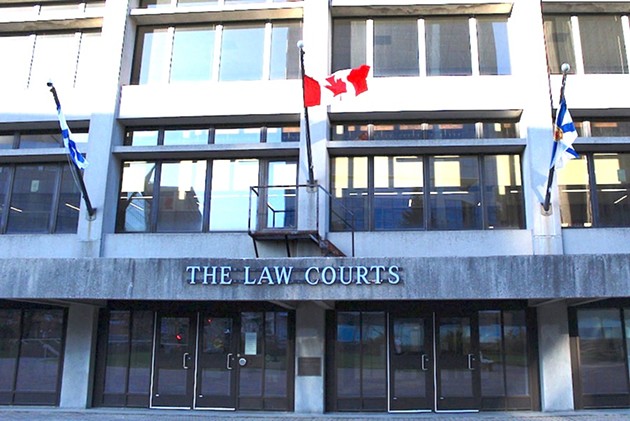 Melvin’s choice to fire MacEwen came at an inconvenient time. The Crown had just finished examining its civilian witnesses—all people who had been involved in or somehow connected to the murder attempt. Some hadn't been eager to talk. At least two had asked not to take breaks, each saying they just wanted to get the questions over with.

“You don't really want to be here,” said MacEwen to Regan Henneberry, on one cross examination. “Correct,” Henneberry replied. On one occasion when police had showed up at his house about this case, he “told them to go fuck themselves,” Henneberry said.

Before being called to the witness stand, Henneberry was jiggling his leg as he sat on a court bench, waiting. His eyes were reddish. A woman rubbed his back and he sighed heavily.

“I don’t know if I can do it. This is more hard than I thought.” —Jimmy Melvin Jr. on being his own lawyer tweet this

After Melvin fired his lawyer, Woodburn told Rosinski that if the accused got his way with a mistrial, the Crown might not be able to get their witnesses to come back and speak so candidly. “We had no idea whether they were going to co-operate, to be honest, until they got up and started testifying,” he said.

One law enforcement expert says that this incident was one of many in an intergenerational feud. “These two families have been at each other for years,” says private investigator Dave Worrell, a retired detective from the Halifax Regional Police. “At one time the seniors of the family—which would be Terry Marriott Sr. and Jimmy Melvin Sr.—were two of the main criminal elements in Spryfield.”

That could leave the rivals’ friends and associates caught in the middle. “Everybody knows everybody” in Spryfield, Worrell says to The Coast. “I think a lot of the times individuals flip flop between loyalties.”

Some of the witnesses have unsavoury pasts. Jason Hallett and Derek MacPhee are both paid informants who are testifying in exchange for immunity agreements. MacPhee's immunity covers a variety of crimes. Hallett’s covers his involvement in this murder attempt. And Regan Henneberry faces related charges for his involvement in the attempt: his trial is scheduled for October 30, and he has said he hopes by testifying he can get the charges dropped.

But within their criminal history also lied a good reason to believe the three, according to Woodburn. In 2009, Derek MacPhee shot Henneberry in the leg. Henneberry had broken his nose in an earlier fight. MacPhee testified at the spring trial that they had reconciled at a Canadian Tire. But Woodburn said they would be unlikely to conspire with each other: “We have two enemies testifying in the same trial about virtually the same thing.”

Melvin wanted to find a new attorney. “I do need counsel,” he told Rosinski when the jury was out of the courtroom. But he also said he was prepared to take on the task himself if necessary: “I could represent myself, your honour.”

A few days passed. Nobody was found to take on the case. Rosinski didn’t give Melvin that mistrial he wanted; instead, he said Melvin would represent himself, and gave him information on how to do so. The court appointed Peter Kidston of Bailey and Associates to offer Melvin legal advice as amicus curiae or a “friend to the court.”

Melvin’s opinion on his legal abilities seemed to change when he was actually defending himself.

As the rest of the trial unfolded, he described the case a “miscarriage of justice,” noted he was “not a lawyer,” made references to others being “high on coke” and said he didn't understand the law or the charges.

“It seems like this was engineered to frustrate the court process.” —prosecutor Richard Woodburn on Melvin’s lawyering tweet this

In Woodburn’s eyes, the defendant was using dramatics to avoid accountability. The Crown attorney repeatedly pointed out moments when Melvin was paying attention, talking about his defense and acting competently in court—contrasting them with the defendant’s more nonsensical behaviours, like asking a cop in full uniform what his job was. “Mr. Melvin is playing games here,” Woodburn said.

Things came to an head at the end of the trial, when Melvin was asked about making a closing statement of his own. Melvin decided he wouldn’t be making one. “I can’t comprehend the court, this province. The justice department. Any of it,” he said to Rosinski. “If someone wanted to harm that man—that man was my friend—if someone wanted to harm that man, why didn’t they just go back and harm him?”

Rosinski asked Melvin to reconsider—“I think it would be unwise for you to not to make arguments in your own defense”—offering him time to talk with his advisor Kidston and reminding him that he would be more likely to be found guilty if he didn't give a closing statement. But Melvin wanted to leave, and he listened to the rest of the trial by audio link. Before the jury came in, the gallery heard a loud howl over the speakers. According to Justice Rosinski the next day, Melvin had sat as far as possible from the speakers, and covered his head with a towel.

Yesterday morning before jurors began their deliberations, Melvin arrived with his jacket inside out, showing off a Burberry-style print. He said he hadn't heard what happened yesterday because he was in the midst of a mental breakdown and he didn't know what was going on.

Melvin announced he was now ready to make his closing argument, before changing his mind yet again.

Melvin still has to be sentenced. His next court date is set for October 10.