Gus didn't get an Order of Nova Scotia 😞

I'm sorry. We failed you, Halifax. 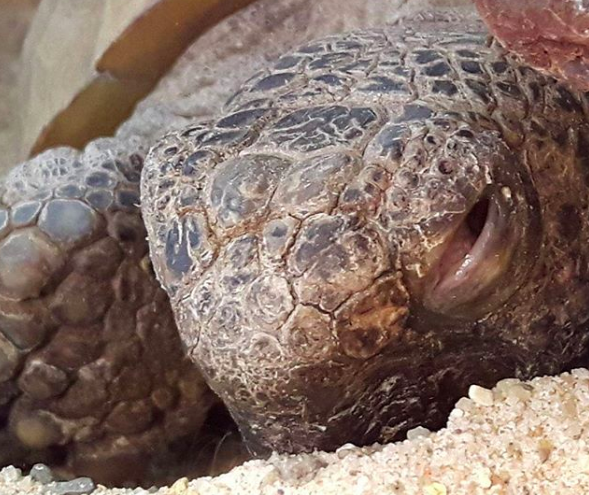 Well, at least we tried.

Gus, the Museum of Natural History’s gopher tortoise, Halifax's beloved mascot, living monument of history, multi-generational icon, will not be receiving an Order of Nova Scotia award this year.

As announced today by lieutenant governor Arthur LeBlanc, five other extraordinary Nova Scotians and also John Bragg have been awarded the province's highest honour instead.

Traditionally, the ONS has only been bestowed on humans. But per international Air Bud rules, as there was no regulation explicitly stating tortoises couldn't win, we thought it was worth a shot.

“One of the most enjoyable roles I have as the Queen's representative in this province is to invest the 2018 appointees with the Order of Nova Scotia, which is our highest honour,” LeBlanc stated in a tortoise-free press release. “The achievements by these six outstanding Nova Scotians makes us all proud and I greatly look forward to congratulating them in person at the investiture ceremony in November.”

None of the nominees have delighted Nova Scotians for two-thirds of a century, but their achievements are no less remarkable; their stories no less inspiring.

The second person under 18 to receive the ONS, Black has represented Canada twice at the Summer Olympics and recently led her team to gold at the Commonwealth Games.

Douglas-Yakimchuk was the first Black graduate of the Nova Scotia Hospital School of Nursing back in 1954 and eventually became the first, and only, Black president of the Registered Nurses' Association of Nova Scotia.

Kitz, originally from Scotland, is a leading academic on the Halifax Explosion and author of Shattered City. She also helped create the Maritime Museum of the Atlantic's permanent exhibit on the disaster.

A practicing nurse of over 25 years, Melanson has been a driving force in how healthcare is offered to vulnerable populations, having helped create the Mobile Street Outreach Team and advocated for the Housing First model of helping those living in shelters find adequate housing.

Smith, the former principal of Citadel High School, was a lifelong educator and a passionate advocate for African Nova Scotian culture and education. Smith sadly passed away last year after battling cancer. His life and impact on the city was celebrated for weeks afterwards by the thousands of lives he touched.

The Order of Nova Scotia was established in 2001, and over the past 17 years has been awarded to 93 recipients who get a medal and the right to use O.N.S. after their names.

The gopher tortoise who would one day be known as Gus hatched from a golf-ball sized egg in Silver Springs, Florida circa 1922. Former Halifax museum director Don Crowdis brought him to his new home in Nova Scotia 20 years later.

In 2009, the province celebrated Gus’ 87th birthday with a press release which emotionally detailed his impact on generations of Nova Scotians. “His shell wears a gentle sheen from being touched by more than a million children’s hands,” it reads.

On behalf of everyone at The Coast, congratulations to most of the nominees and our heartfelt condolences to Gus. There's always next year, little guy.