After winning album of the year at the 2019 International Singer-Songwriter Association, the country-rocker himself returns to a Halifax stage near you. 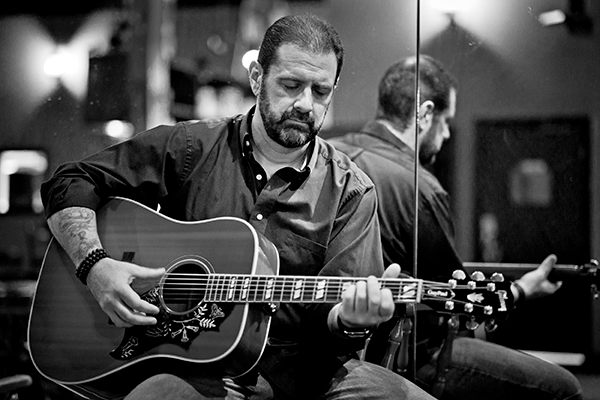 W hen Guy Paul Thibault hits the stage, he goes into what can only be described as a self-induced trance.

The singer-songwriter can crank out as many as 150 songs during a performance without stopping—not even for water. "I'm not big on taking breaks," Thibault reflects on his extreme, if not dehydrating, commitment to giving his audience a bangin' good time. "I usually finish a song then I'm right into the next song. Especially if people are dancing, I don't stop at all."

A born and bred Cole Harbour boy, for over 20 years, Thibault has played acoustic sets for audiences in pubs, bars and live music venues in Halifax, Dartmouth and across the Maritimes.

Best known for his amusing stage banter and covering what he describes as "quasi-Americana" artists—Bruce Springsteen, John Mellencamp and Steve Earle are regular favourites—it's Thibault's own songs that are now receiving attention.

After going solo from a cover band, Thibault continued to play regular circuits as a cover performer, occasionally slipping in the odd original into his mix of classics. After receiving stellar reactions from his audiences, Thibault decided to release his own material.

Seven albums and 250,000 downloads later, the decision, it seems, was a good one.

"I find that really kind of strange and surreal," Thibault surmises of his popularity.

"I find the more people are recognizing my work, the more I'm giving them and the more they're like 'No, can you please play another one of yours? We want yours, play us one of yours.'"

In August, Thibault's latest album, The Road Between, won album of the year at the 2019 International Singer-Songwriter Association in Atlanta, Georgia. He was also nominated for several other awards, such as male rising star of the year and male songwriter of the year. "I was over the moon. I couldn't believe it," Thibault beams of his recent award. "I still try to justify it a little bit in my head that it actually has happened to me."

"A lot of the original stuff he does is just terrific. It's not like anything I've ever heard before. He takes his own life experiences and turns it into these great songs. Some of them are super catchy," says Tanya Monk, who used to regularly book Thibault at Freeman's in Sackville.

A "super chill" guy whose crowd-pleasing stories ranging from his life experiences to the meaning behind Steve Earle's "Copperhead Road" drew in large crowds "partially for his show, partially to hang out," Monk says Thibault never failed to put on an entertaining performance.

Thibault's busy schedule only permits him to play the odd Halifax bar ever so often, (see list above) and he plans on releasing more singles for the fans that started it all next year.

"(They push me) to write more, and to present the things I do and the things I write to the audiences in front of me."