Why one local cosplayer says the yearly convention helped her become her truest self.

Kristina Gillis has come a long way since her first Hal-Con three years ago. “I was a bit worried about being judged because I was also cosplaying for the first time, but I was amazed at how well it went over,” she recalls on day three of Hal-Con 2019. “Everyone was so friendly and accepting.”

That sense of camaraderie is one of several reasons she has returned to the convention every year since.

For Gillis, events like Hal-Con and Geequinox—which is held in Halifax during the spring—offer a sanctuary where she can “nerd out.” And while Gillis stresses that not all attendees cosplay, for those who do, it means sharing and celebrating the experience of transforming themselves into someone (or something) else.

Standing on the fifth floor of the Halifax Convention Centre in a cavernous conference hall turned sci-fi/fantasy bazaar, surrounded by several of her costumed comrades, Gillis is in her element. This year she is cosplaying a warrior version of the popular '90s Manga heroine Sailor Moon. She adjusts her crown, which bears a golden crescent moon, flips one of her cascading pale blonde pigtails over her shoulder and continues. 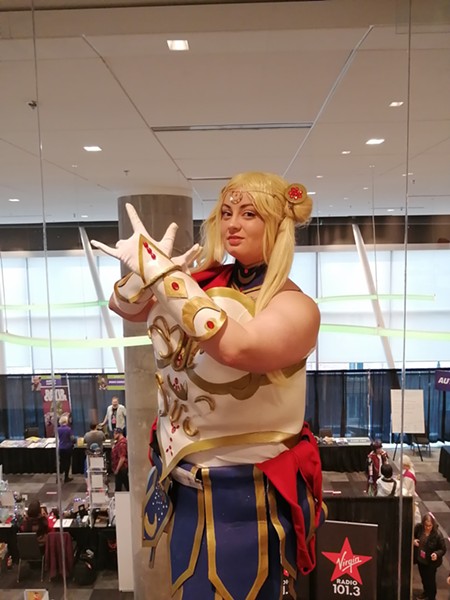 “In a way, I’ve been unofficially cosplaying since I was a kid,” she says, scanning the crowd appreciatively. “I’ve always tried to really embody the character I was dressing as. As I got older, my Halloween costumes were always extravagant. They became characters —I’ve put months into them.”

Cosplaying, she adds, is like Halloween to the nth degree.

But for many cosplay is not a mere game of dress-up.


“The costumes people choose usually bring out something in them that's not usually visible. For me, cosplaying was the first time I felt like I could be my authentic self.”

The first cosplayers (costume role players) dressed primarily as Star Trek and Star Wars characters at science fiction conventions in the in the 1960s and '70s. But, the practice has grown to include characters from comic books, anime, video games, movies and TV series.

Now cosplayers like Gillis regularly pack conventions around the world.

At roughly 6 feet tall in her bright red boots, her entire upper body clad in armour she built herself, Gillis, a 29-year-old administrator from Berwick, Nova Scotia, truly looks the part of the warrior princess she emulates.

“I’ve always wanted to cosplay Sailor Moon. She just looked so fierce. I actually saw the concept art for this a few years ago, but at that time I just tucked the idea away because I was new [to cosplay] and unsure.”

Since she began connecting with other cosplayers though Hal-Con, Gillis says, she has become more confident in her character choices and ability–something, she notes, that has carried over into her life outside of the Con world.

Before she can elaborate, a very convincing Pennywise—the terrifying antagonist from Stephen King’ horror hit IT—passes by and asks Gillis, in the killer clown’s blood-curdling hiss, if she wants to “play” with him.

Gillis laughs and gamely tells Pennywise that she’d rather not “float” today and continues: “I started doing beauty pageants when I was 14 and did them all through high school. I have mostly good things to say about that experience, but I will admit that I fell under the pressures that come with pageantry very easily and I’ve struggled with anxiety and depression.”

Gillis says she loved competing, but as she began to figure out who she was, she felt less confident sharing it. She left the pageant scene when she was 18.

When Gillis discovered cosplay a few years later, she chose Catwoman/Selina Kyle as her first character.

Donning the catsuit she says, was life changing: “Catwoman was probably the first comic book character that I really loved. I saw her as fearless and glamorous, but mostly brave. At a time in my life where I was struggling, she was a good hero for me—obviously not the criminal aspect of the character–but the confidence, her bad ass-ness.”

Over the years, Gillis says, she continues to gravitate toward strong, female warrior types, but the difference is, she now counts herself among them— something she reminded herself of as she re-entered the pageant world in 2018.

At her first adult pageant, she cosplayed Selina Kyle (Catwoman’s alter ego). She says once again, she was surprised to discover the move was well-received.

She says she hopes to inspire her peers to embrace their true selves, as she as learned to.

“I kept a massive part of me hidden for so long. I just feel like that’s finally not necessary. I’ve worked hard to be my real self and love myself—once you figure that out, you just don’t go back.”