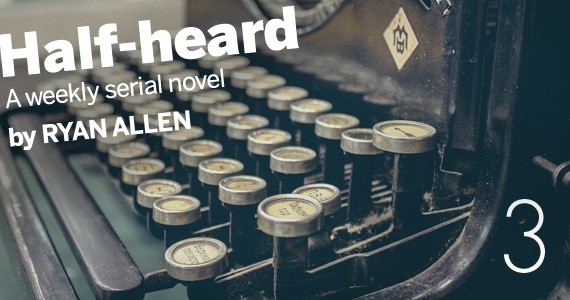 Alex arrived home from a weekend visiting his parents outside of the city and was dropped off at an absurdly early hour before the onset of light, earlier than expected.  And as far as anyone else knew he was totally alibi'd up, ruling him out as the one who would gun his Bavarian into A.'s mother's homemade doily through the night; which is why Welnot was seeking guidance from Alex.

But when he arrived home with the soundlessness of sunrise he did as any roommate exempt from tenant tribunal would do and sought to raid the kitchen. Cheerios, doughnuts, cheese slices, excess spicy Szechuan Silver Drag' in tupperware—the whole deal.

But as he opened the fridge, his want was derailed and mood killed by the appearance of a just-exploded egg that must have been balancing precariously in one of the fridges' doorshelves and for a few moments just stood there, feeling the fatigue and failure that makes you wait around for a few seconds to see if some somebody will come muck it up. Seconds passed and he made his way out of the kitchen with the refrigerator door ajar and the egg broken and splattered below and pointed himself towards sleep, exhausted. He was thinking, in his weariness, that the whole scene if left unattended could just make itself look like Sarah or someone came home drunk and made a mess of the place in the middle of the night.

But then something came over him, a kind of decency—the unsung, heroic kind. He thought about all the commotion this would cause in the morning, the passive-aggressive notes that'd be on every box of Chunks Ahoy!, the pesto that'd be under lock and key, the egg cartons covered in Sharpie, the resealable baggies melted shut. He trudged back downstairs huffing and pouting on every step like a kid who was just told to clean up his mess by a finger-wagging headmistress and looked at the muddle of eggshell and membrane, grabbed a cloth from the sink and sopped it up, but then the muck was still too much for him to handle in his hand without it slipping and sliding every which direction gravity determined so he grabbed this fondue fork that was in the dry rack to carry the clear-ish albumen covered rag over to the sink.

And as the sun crept in through the kitchen's lone window and the bottle guy's mobile mountain of bottles and cans wheeled beside the house, swerving at the sudden prospect of more by their home, rattling like a crock-pot carrying horse, he felt the first touch of sun as it crawled its way up his t-shirt, feeling it gradually warming the fabric and nape of his neck where it made his hairs curl and itch. It was a good enough job well done he thought, and he turned to bed.

"He's a weird guy, maybe it was, maybe it wasn't, but I'm leaning hard on the same side as you here, thinking yes, definitely, of course it was him, but maybe we shouldn't flat-out pin it on him, you know? But I think it should be brought up delicately so as not to exacerbate things, know what I mean?"

"Shouldn't everyone know? Shouldn't we get rid of him? This is just messed up on about 30 different counts. This is his—"

"Have you seen him? I know you're new, A., but look at him. Here, let's go upstairs. I think he's asleep. Just a crack, now, carefully. See? He's sleeping like a cherub on clouds now, but, man, think of the night of libidinous horrors that tortured him while we all slept like the beauty in the woods. Where is a guy like that going to go? Don't you feel kind of sorry for him? He's probably praying in the mirror every morning, fighting off the urge to release onto every person on the street, man woman or child. He probably can't even sneeze without it going off."

"So twisted. But we've known him for awhile. He's a good guy, trust me. He needs love like any of us. The state he'd be in without that? Man. A guy who drops his baker's batter—"

Alex whispered over A.'s shoulder, A. still peering in the room and in dubious battle with his heart and his head, "He's sleeping now, but I'll talk the little guy when he wakes for supper. Best to take care of this quietly so as not to exacerbate things, you know?"

The new chapter of Half-heard is published in The Coast—newspaper version—every Thursday. One week later it is published here online. So it's easy to catch up online, but best to stay ahead in print.