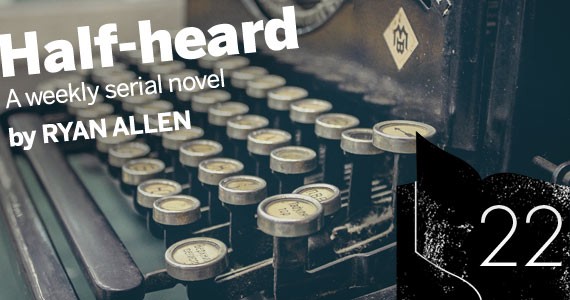 "I got time," Myles said, awkwardly. He caught himself remembering a detective from a Dick Tracy-type movie saying the same thing to a distressed client at a bar and felt a little embarrassed.

Quiet between people scared Myles. As it—the quiet—lengthens it becomes all the more terrifying to attempt verbally penetrating it. It's like a balloon that gradually inflates, becoming so big yet increasingly more touch-sensitive  to the point that the prick of a pencil's edgeless end could explode it and make a room run for cover. The silence left Myles with too much space between remarks to worry.

Myles was nervous and preoccupied with himself, still trying to figure out how to seem not, thus digging himself into an even more paralyzing antisocial state. He remembered seeing a health-and-lifestyle news feature that people who looked comfortable with themselves seemed the most approachable. He sat congruent to the angle of the step—still, rigid, trying to not look at Sarah, who was in the periphery of his focus. He thought of the term Weltschmerz from another TV special he watched about German romance authors. The term denotes a sense of dissatisfaction with the physical world, a dissatisfaction stemming from the feeling that anything existing in the corporeal realm can never satisfy the demands of an intellectual's mind. He thought about that, and how that could probably slump his shoulders a bit. And existentialism. And misery. And the dark. All of that. Anything that could give him that dejected sense of coolness; troubling situations that were out of his control—a dying pet, things so bad all you can do is shrug and say "whatever," the four boys and the dog across the street creating their own redneck Miguel Calderón scene. What else; the thought of receiving word that his mom died on her way home from work, a burglar julienning her limbs on the kitchen table, a bombshelter-grade national security emerg—

"Last night I was helping my roommate," she started, cutting off Myles' steadily decaying train of thought. "This girl Gert, with... something. Anyways, she's a good girl, I know. We've lived together for awhile. She's got weird routines and habits, but who doesn't."

"Oh, habits, totally," Myles shrugged. Myles thought he couldn't really relate at all, he thought, and had to ham it up. Though given his own habits of hiding in closets and crawling through windows, it made the remark kind of ironic. Myles glossing over the most pronounced and bizarre part of himself was kind of strange, given all the time he keeps to himself, but the inability to take notice of one's obvious personal peccadilloes is a characteristic of many a socially awkward person.

"Like, everyone has something, you know? But this was really weird and—sorry, your name again?"

"Myles, I think this is all going to get bad."

"Your other roommates, they..."

"When Gert hopped out of the shopping cart and mad-dashed to the bathroom holding her hands over her back to keep it all from coming out, it was..."

And Sarah went on. As she vividly described watching Gertraud leap from the cart and keeping her hand over her backside like a tub-stopper Myles lost any ability to affect the world-weary impassivity he had been striving for. She told Myles that just before Gert made her Olympic long jump into the staff bathroom, she saw something fall from her shorts.

Myles offered a conciliatory kernel he harvested from mommy's wealth of feel-better-baby axioms. "Everybody poops."

"No," said Sarah, eyes fixed towards the road still like she was steeped in a flashback.

"They don't?" Myles never stood behind anything he said, no matter how indisputable.

"No, I mean it wasn't shit. Shit didn't fall out of her shorts," she said, shaking her head.

There was a kind of unpredictability to the coming revelations that would be shared by Sarah, and already Myles couldn't map out any of this on a Freytag pyramid if he tried. He hadn't anything in his life half as exciting as this conversation about maybe-poop/maybe-not-poop—except for the time he had an urgent mid-day meeting with a hurried child therapist who told him not being able to jump off a building and fly away was just as amazing of a superpower as being able to. Telling him super-impediments were just as special as superpowers, and his ability to move in accordance with the laws of gravity should be embraced like any other hero-making supergift.

The new chapter of Half-heard is published in The Coast—newspaper version—every Thursday. One week later it is published here online. So it's easy to catch up online, but best to stay ahead in print.