June 08, 2020
Calls are being made across North America to reduce or redirect police budgets in the wake of another killing of an African-American man by police in the US. But the crime against George Floyd is far from the only reason citizens are ready to change the status quo—here in the Maritimes, a police officer responding to a call in New Brunswick on Thursday shot and killed 26-year-old Chantel Moore, an Indigenous woman who recently moved to the Maritimes to live near her mother and daughter.

Activist and author Desmond Cole was on CBC last week to talk about disarming police forces; an episode of Sandy and Nora by Sandy Hudson and Nora Loreto about abolishing the police already has more listens than all their other episodes combined; and across social media in Halifax people have been calling on HRM councillors to cancel the purchase of Halifax Regional Police's army vehicle, drop charges for Santina Rao and reconsider how much money is spent on policing. Before this, the only person vocally calling for defunding police was El Jones, who presented to the Board of Police Commissioners about it in January.

Jones' plea was not heard, as HRP's budget increase went forward as planned in early March. Then COVID-19 happened, business units were asked to trim their budgets last month, and HRP came back with a proposed $5.5 million cut.

For politicians, the "emergency services" of police and fire fighting are usually friendly terrain. In past years, at least, it's been politically safer to spend money on emergency services than, say, parks or libraries—plenty of people have library cards, but absolutely no one wants their apartment to burn down. So in round-two of budget deliberations, regional council had trouble accepting the same cut for police as it did for every other business unit.

"Police and fire are sacred, they should not be asked to reduce budgets," said councillor David Hendsbee during budget discussions.

"We all support fire and police. Let's just say that," said mayor Mike Savage. "We know the importance that they have in our municipality—not just ours, but every municipality in the country, in North America and around the world are reluctant to make changes that might impact on public safety."

At that May 26 meeting, council voted to only cut $3.5 million from the police budget, instead of the proposed $5.5 million. (Fire's budget is separate from police's.) The decision on the police budget isn't technically finalized until this Tuesday,  June 9, when regional council will convene virtually to vote on the entire city's 2020/21 budget.

Council met for eight hours on May 26, and many days over May, working on all sorts of COVID cuts to the budget. May 26 was also the day that Minneapolis police put out a statement about a man who died in custody, saying he had some sort of "medical distress" that officers noticed after he'd "physically resisted" arrest. By the time council's meeting was over, video of George Floyd's murder at police hands was out in public.

The councillors went into their session prepared to re-fund police by $2 million, and came out into a changed world, one where defunding police is now mainstream consideration. The way normal budget processes go, changing the course of the decisions leading up to Tuesday's budget vote would be difficult. But if 2020 has taught us anything, it's to question what "normal" even means anymore.

Mayor Savage was among thousands of anti-racism protesters at last week's Take A Knee rally. "We all have a role to play," Savage told NEWS 95.7. "We all have to do things to make it better."

The Halifax Regional Police and RCMP operate police services in Halifax Regional Municipality. In 2019, HRM budgeted $126 million for police in its operating budget (staffing and programming) and about $3.5 million in its capital budget ($500,000 of which was for an Armoured Rescue Vehicle, upgrades on old vehicles, and PPE "including ballistic vests, helmets, shields, et cetera").


These are big numbers, but it's hard to make sense of how they fit in with the municipality as a whole. Adding to the confusion, capital budgets can be saved up over several years before the money is spent. So as a first step towards understanding, let's put the city's capital spending aside and focus on operations: money spent to keep the city working day to day.

This chart shows a breakdown of budgeted operational spending for each business unit in the original budget for the 2019/20 year. Policing is the third-highest item, just ahead of public transit and significantly more than the "Fire + Emergency" line. The COVID-cuts were spread fairly evenly across the departments–so the graph after tomorrow's meeting will follow the same pattern if no big changes are made. 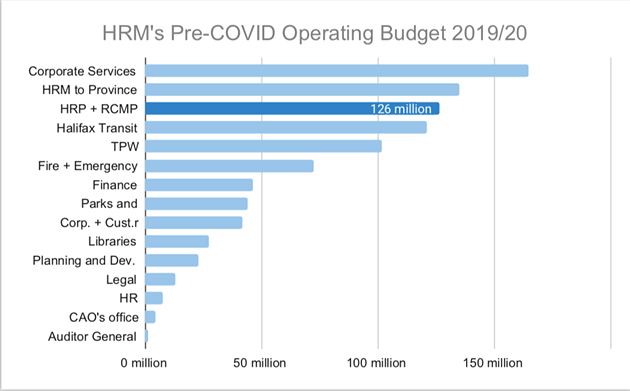 The whole budget for operational spending from the municipality was $955 million, and $403 million of that was to go towards compensation and benefits. It pays for all the people who work for HRM, from summer beach lifeguards to engineers who work in the planning department to cleaning staff at City Hall to librarians, police officers, sergeants and HRP admin staff.

Four hundred million dollars is a lot of money to pay for a lot of people, but the public has some accountability over this pile of cash. In 2015 the city decided to publish the name of everyone it pays $100,000 or more per year. This "sunshine list" comes out annually, to allow for trends to be seen over time.

Researcher Alex Luscomb found that police spending has been increasing across Canada since 1996/97. "In 2017/2018, the most recent data available, we spent a total of $15.1 billion on policing across the country," Luscombe said on Twitter, "funding 141 municipal police forces, 36 First Nations self-administered police forces, 3 provincial police forces, and one federal police force."

Since 2006, Halifax's operational budgets for police has increased 91 percent.  Other indexes for crime have been decreasing: from 2006 to 2017,  Halifax's Violent Crime Severity Index declined by 50 percent.

How Halifax spends its money (the money that comes from residential and commercial tax dollars, plus a bit of revenue and money from other levels of government) gets decided each year by councillors during the budget process. Projects move up and down in priority for all kinds of reasons—but CAO Jacques Dubé has been clear throughout this year's budget process that COVID-19 is going to have big effects on HRM's budgets and cuts will have to be made, somewhere.

And just yesterday, nine Minneapolis city council members vowed to “begin the process of ending the Minneapolis Police Department.” The day before, the city's mayor said he did not support total abolishment of the police. The statements, reports the city's Star Tribune, have set off what is likely to be a long, complicated debate about the future of the state’s largest police force.

Everything about city and municipal budgets is long and complicated—but that doesn't mean it's not worth paying attention to.