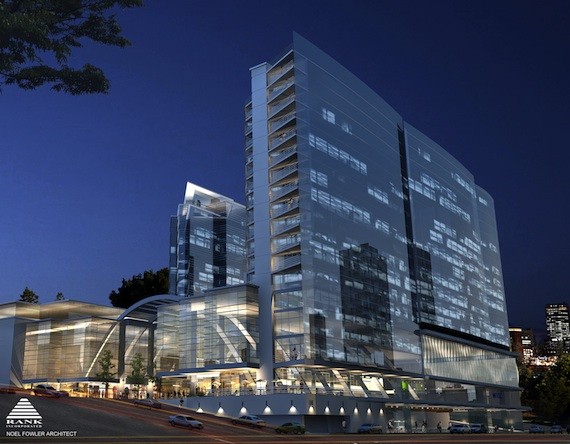 At its regular Tuesday meeting, Halifax council OKed the framework for a contract with the province and Rank, Inc. for a new convention centre. Council did not vote on a specific, detailed contract because “the details are still being worked out,” said deputy CAO Mike Labrecque, who however assured council that those details would reflect only “minor” changes from what was presented to councillors.

Labrecque did not say why he didn’t wait until terms for the final contract were reached before bringing it to council. Even when the contract is finalized, Labrecque made clear that it would not be a public record.

In any event, the convention centre project should start seeing the light of day soon, and should open in 2016. Here’s what happens now:

Despite assurances that construction will begin “in weeks,” developer Joe Ramia still has to bring the project to the Design Review Committee, a group created by HRM By Design to vet new construction. Already some committee members have expressed concerns about the concrete massing so close to Argyle Street, and details about the Market Street pedestrian mall will also be a matter of contention. Expect the review process to take a few months, before cranes start working the site.

Remarkably, Labrecque said there is no requirement in the contract that Ramia actually build the hotel and office tower that are part of the convention centre project, although in the past Ramia has said a major hotel chain has committed to occupying the 18-storey hotel, and the project was delayed as he secured tenants for the 14-storey office building.

The city did secure two $2.5 million “letters of credit” from an unnamed bank that will revert to the city should Ramia not proceed with either building, and so “he’d lose $5 million out-of-pocket,” said Labrecque. Of course, Ramia wouldn’t personally lose the money, as the project is fronted by a limited liability corporation.

It’s expected that Ramia will soon announce who the tenants of the office building are, and at that time we’ll learn if they are new-to-town, or simply existing Halifax operations that are shuffling office space.

What will it cost?

Calculating the true price tag for the convention centre is complex. The governments’ construction costs are a total of $164.2 million; the federal government will pay $51.4 million of that on the day the convention centre opens, but the balance---$112.8 million---will be split by the city and province, and financed by Ramia’s bank over 25 years. The direct costs for financing will be $5.1 million annually, for each the city and the province.

Additionally, the city and province will split operating costs of the convention centre. City finance director Greg Keefe said the city’s share is estimated at $1.45 million annually, but “projections for that cost are not final.”

On the city side, Labrecque admitted that the city would face a potential “cash flow crunch” soon after the new convention centre opens in 2016, and so the contract includes a provision that allows the city to defer, with interest, up to 25 percent of its first 10 annual payments, with the deferral financed by the province. The city would be charged the province’s 10-year borrowing rate, plus one percent, which today would be 4.65 percent total.

That deferral achieves a remarkable degree of non-accountability. Should the new convention centre fail to meet revenue goals, the bill to the city will not come due until 2027. By that time, every city official and every city councillor responsible for the deal will have either moved on, retired or died. The debt will be someone else’s responsibility.

The above financial arrangements were passed by the full council vote of 19-5, with councillors Reg Rankin, Peter Lund, Jackie Barkhouse, Jennifer Watts and Debbie Hum opposing.

Probably the greatest cost to the city, however, will be the purchase of the existing convention centre and the office tower above it. The contract calls for the province to attempt to sell the complex, but with a weak downtown office market, everyone admits that’s unlikely. If it isn’t sold to someone else, the city is required to buy it in 2016.

Two years ago, the cost for that purchase was pegged at $12 million, but some councillors say it could be as high as $15 million by 2016. A much greater cost, however, would be the renovation of the building, which one councillor said could be $35 million.

Then there’s the question of what the city would do with the building. City offices are now mostly housed in the privately held Duke Tower, but the lease doesn’t expire until 2021. There are also city offices in the city-owned Alderney Landing, but it makes no sense to move offices from one city-owned building to another. In addition to TCL offices, which will presumably mover over to Ramia’s new tower, the WTC building now houses several provincial departments, but with cuts to provincial staff and the re-locating of provincial offices to rural areas, there’s no certainty that the city can maintain those leases.

As for the existing convention centre in the basement of the building, councillor Dawn Sloane hoped that it could be turned into a municipal archive/museum, at unspecified cost. David Hendsbee suggested that the Art Gallery of Nova Scotia would want to move into the space, an idea that will no doubt catch AGNS by surprise.

The potential purchase of the existing WTC complex was approved on a council vote of 21-3, with Barkhouse, Watts and Sue Uteck opposing.

The new convention centre, hotel and office tower will of course generate property tax revenue and, arguably, increase assessments of nearby buildings, resulting in increased tax payments to the city. Three years ago, a consultant hired by TCL put the increase in revenue for the city at $3.65 million annually (page 4 & 5)---that is, before the city pays the $5.1 million construction financing cost, the $1.45 million operating cost and half the new convention centre’s deficits every year, as well as the cost of buying, refurbishing and operating the existing WTC complex.

Tuesday, however, council was told that the increased property tax revenue will more than cover the city’s costs, albeit maybe not for those first 10 years. No actual figures were put forward to back up this claim, but there has been another change since the 2009 consultant’s report---now, the city is required to pay half the convention centre tax bill, to itself. The consultant had predicted that considering only the new convention centre tax payments, the city would receive an increase of $600,000 a year, but since the city is now paying half the bill, that figure will be just $300,000.

Reached Wednesday, Keefe said the independent consultant’s 2009 estimation has been superseded, and referenced a single PowerPoint slide put together by city staff for a presentation to council on November 9, 2010 (slide 44). That slide, which doesn’t explain how the numbers were calculated, shows an expected net increase in property taxes to the city of $3.783 million. “Over time, the value of the property, and therefore the tax, will increase to equal and exceed the costs, which are mostly fixed,” assures Keefe.