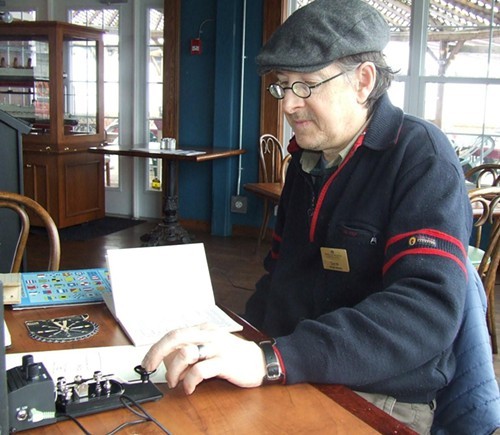 About 50 people gathered at Murphy’s Cable Wharf restaurant yesterday for the official launch of an exhibit celebrating Halifax’s role in a 19th century communications revolution. The revolution began in 1858 with the laying of the first transatlantic telegraph cable. It meant that messages, which took weeks and sometimes months to cross the Atlantic by ship, could now be transmitted within hours by telegraph operators hammering out the dots and dashes of Morse Code.

“There’s a historian who said that the laying of the transatlantic cable was in some sense the Internet of the Victorian age,” said John Hennigar Shuh of the Maritime Museum of the Atlantic. “This is an incredibly important part of our heritage. It’s something that we should be celebrating.”

The exhibit consists of 10 panels erected on the wharf outside the restaurant at the foot of George St. The panels tell the stories of how Halifax ships and crews played a vital role in maintaining and repairing 3,000-kilometre-long transatlantic cables that frequently broke or corroded. One panel calls the transatlantic cable “The Eighth Wonder of the World” because “international communications were transformed forever.”