From the MMIWG inquiry, to poverty and access to housing and childcare, candidates discussed their ideas and parties' platforms. 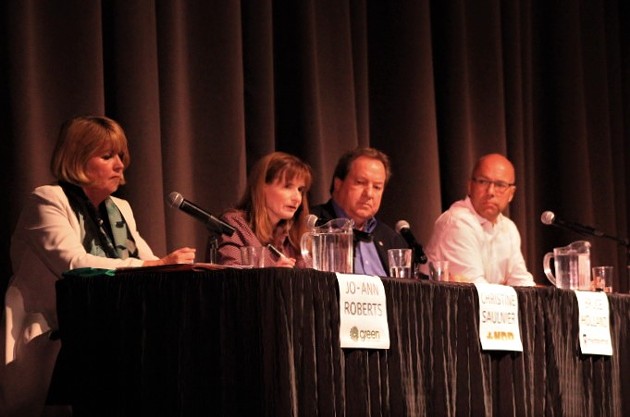 Candidates for the Halifax riding met at the Spatz Theatre on Thursday for the first debate of the federal election campaign since the writ dropped—official Canadian politics slang for the kick-off of a federal election campaign—on Wednesday September 10. Jo-Ann Roberts of the Green Party, Christine Saulnier of the NDP, Bruce Holland for the Conservative party and Andy Fillmore of the Liberals answered questions about women’s rights and equality posed by organizations like YWCA Halifax, the Immigrant Migrant Women’s Association of Halifax, Nova Scotia League for equal opportunities and more.

Over 150 people—mostly women—showed up to hear what they had to say about missing and murdered Indigenous women and girls, gender-based violence, women and poverty and rights for migrant women.

As a debate on women’s issues, it’s little surprise that the two candidates who identify as women got the most positive responses from the audience. Able to quip from personal experience and not rely on “things they learned from their sisters,” while being in the luxurious position of being able to say how much better things could be than they are now, they spoke passionately about why what matters to women should matter in parliament. (If only more men had shown up in the audience to hear what the candidates had to say.)

On gender-based violence, Holland spoke of multi-year funding to give organizations the ability to do better future planning, and Fillmore said, “the time has come to take this seriously.”

Roberts stressed the importance of support for trans students and spoke of the countless women who have gone to the police and not been believed.

Saulnier spoke of her experience working for Adsum for Women and Children, saying women of colour or those with disabilities are “facing…just…disgracefully high rates of sexual assault. We need a government that's going to stand up and say enough.”

On poverty, Roberts spoke of the Green Party’s plan for a universal basic income, saying “poverty is a lack of cash, not a lack of character.”

Saulnier says her work producing the annual child and family poverty report card for the Canadian Centre for Policy Alternatives for the last ten years “has been a depressing thing to do every year.”

Fillmore spoke of the $22 billion Opportunity for All funding for poverty reduction that’s been invested since 2015.

On the MMIWG report Holland, the Conservative candidate said “We would implement all the recommendations in the report,” though his party leader, Andrew Scheer, has already disputed the inquiry’s use of the word genocide. The Conservative platform has still not been released, so what they actually promise to do or not do is unknown. (On the 2015 campaign trail, the Conservative party leader Stephen Harper said there wasn’t need for a national inquiry.)

On safety and rights for migrant women, both Roberts and Saulnier spoke of eliminating the Safe third country agreement which says those seeking asylum in Canada via the US, can’t do so.

Fillmore mentioned that the bilateral agreement between the province and the federal government on housing was only finalized in August—much later than many other provinces—so that’s been a large hold up on housing projects in Halifax.

Saulnier criticized the national housing strategy as being “built in the bubble of Ottawa for maybe Ontario and Quebec but is not fitting so well in our community.”

Questions from the audience covered childcare and abortion. All candidates agreed childcare is super expensive, expressed different ways of making it better. And all candidates spoke against any “reopening of the abortion debate” in parliament. Holland said the debate has been settled among his party.

To applauds, Saulnier said about the debate of women’s rights: “There isn’t one,” adding, “This is fundamental and essential to our bodily autonomy and integrity. And it is ours. Hands off.”

In their closing remarks, candidates rounded up their promises with a neat little bow, calling for action and change and asking for support.

Roberts, summed things up in her closing remarks saying “Women can make their voices heard in Ottawa. Just send more women to Ottawa.”

———
The Coast will be publishing the list of questions submitted by audience members and inviting the candidates to answer some of them. Stay tuned.