“Perk Up, Pianist!” By Sarah Hagen Sarah Hagen’s Perk Up, Pianist! was one of my favourite shows of the 2016 Fringe Festival and I was glad to see it on this year’s schedule. It’s a wonderful mixture of virtuoso piano playing and charmingly puerile humour. Renowned concert pianist Hagen can be seen in more formal, traditionally classical venues, but here there’s more intimacy to the performance (and more jokes). Hagen has been referred to, facetiously, as a “sit-down” comedian, but that can be misleading. She does not deliver her quips in a traditional fast talking, wiseacre manner, but rather in a warm pleasant voice, perfectly in keeping with the beautiful classical pieces she plays throughout. Her humour tends to be of the shockingly cheesy (and shockingly obscene) variety. I laughed sincerely every time she delivered one of her puns and punctuated it with a startled look at the audience, as if she herself were shocked by her own audacity. The show does seem to have changed since last year. There are fewer “bad date” stories and (if memory serves), a little more uninterrupted piano playing. (Hearing Hagen play one of Rachmaninoff’s Preludes was reason enough to attend.) At the heart of the show, however, remains the theme of an artist who regains her love of music after the burnout caused by the endless hours devoted to a demanding, if beloved, pursuit. This show got a late review, unfortunately, and there are only two performances left, tonight at 5:30 and 8:30, so see it while you still can. Hagen will have you loving classical music and thinking, thinking deeply about the pianist that is in all of us.—Martin Wallace The TNS Living Room, 2353 Agricola Street 60 min. $10 Thursday August 31 at 9:45pm Friday September 1 at 6:55pm Saturday September 2 at 8pm Sunday September 3 at 2:25pm Monday September 4 at 7pm Tuesday September 5 at 8:40pm Wednesday September 6 at 8:30pm & 10:45pm Thursday September 7 at 5:30pm & 8:30pm 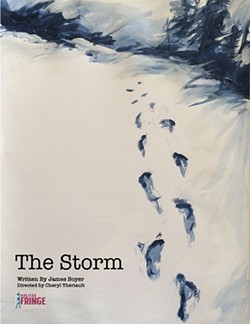 Betrayal. Deceit. Scandal. Murder? Advertised as a Maritime urban-thriller, The Storm falls short of the suspenseful mark, landing it somewhere closer in the quasi-drama genre. The result is an episode of Dallas if it took place in Nova Scotia. Written by James Boyer, The Storm centres on the Corkum family— mother and city councillor Diane (director Cheryl Theriault) and her two combatant daughters Liz (Kelly Doney-Morrison) and Jan (Jocelyn Leblanc) whose collective relationship has down-spiralled since the mysterious disappearance of their father. After discovering their mother is involved in a relationship with local real-estate magnate Joe McDonald (Terry Coolen), Liz and Jan have their own suspicions about McDonald's true motives. The result is a loosely spun web of mystery and for what it lacks in suspense, makes up for with a healthy dose of intrigue.

If there's an enemy to The Storm it is subtlety. Coolen endows Joe McDonald with duplicity and avarice. His descent from benevolent boyfriend into wolfish villain territory lost steam and nuance with every reference to the Three Little Pigs. Boyer imbues his script with admirable and ambitious spirit, but its reach somewhat exceeds its grasp. The theme of the Wendigo, (a cannibalistic spirit rooted in indigenous culture), never truly manifests onstage in a concrete, exciting manner. Additionally, the bombshell surprise dropped at the end of the show arrived too late in the show to resonate for deeper impact.

Fortunately, these missteps are fixable and I believe with workshopping, The Storm can delivers all it promises. Boyer's concluding moments provide a satisfying "what the?" moment and leaves you trying to reconnect the dots in the play. Likewise, Doney-Morrison is a headstrong heroine with an interesting back story; watching her attempt to reconcile with her estranged sister and amending a stolen past is one of The Storm's best offerings. There is a great play evident here and the very essence of Fringe is to present your work and to keep moving forward. - Carey Bray

It goes without saying that love is an all too complicated subject to be covered in half an hour, but it's entertaining watching hosts James MacLean, Katie Dorian, Ailsa Galbreath, and Gina Thornhill try their best. Funny, spirited, with moments of insight and dead-on-accuracy, First Date Last Date discusses how love is life-changingly intoxicating when it works and how it makes you re-evaluate everything in its less enticing moments. It's a fun experiment and one that has potential for further exploration and growth. While some of elements (the envelopes, the seating system, and random dance numbers) weren't as explored and explained as it could've been, it's fair to say that First Date Last Date has a lot of heart. Carey Bray

At first, it looks like Dan Grirder walked onto another magician's act. Deadpan, nonchalant, and sarcastic, the Minneapolis native brings an interesting (if unfortunately brief) performance. A professional juggler for hire, Grider doesn't put on an as elaborate a show as other audience-based types of performers like Jeff Newman in Mind Games, but for what Grider lacks in presentation skills and decorum he compensates with his own unique brand of humour and genuine hard-earned talent. As far as juggling chops go, Grider has them mastered (his puppetry skills are near perfect) and what he brings to the stage will at the very least leave you entertained and laughing all the while. – Carey Bray