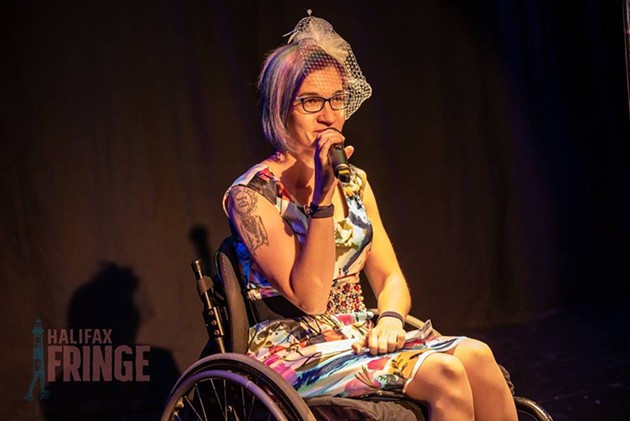 The 2018 Halifax Fringe is over for another year and countless hardworking artists, volunteers and audience members can finally get a good night's sleep. The 28th year of the festival saw over $45,000 in box office sales with 6,000+ tickets purchased. Get your final fix with a few last reviews and a complete list of festival award winners. Until next year!

Jon Blair: Live from the Garbage
By Jon Blair

Can someone explain to me why funnyman Jon Blair's Live From The Garbage was so under-attended? It's a solo-act featuring a variety of hilarious sketches that made it a fantastic, undemanding addition theatrical experience. According to my trusty Fringe guide, Blair has worked with the CBC comedy, This Hour Has 22 Minutes and beloved Fringe darlings, Sex T-Rex. These experiences have served Blair well as his outlandish sense of humour helped him concoct a solid hour of hilarity. Standout sketches include a public cable show, entitled Cables and Cords, a small town with a dark, murdery secret, Thin Lizzy karaoke, and using Bane's voice as a tool of seduction.

In case you haven't figured it out from those examples alone, Blair's humour is solely his own and it was a shame his run here in Halifax was so limited. Fingers crossed that next time he's in town he gets more time to perform and a bigger crowd with which to entertain because he's definitely one of the funniest people around. - Carey Bray

Steve Day is a strange fellow. The Montrealer and graduate of the renowned École Philippe Gaulier has an elusive sense of humour, but the audience was along for the wacky ride. The premise is this: Ted and his pet goldfish, Wild Bill, have a live YouTube show with songs, puppets, boot stompin', and a wholesome environmental message about the dangers of plastic. Ted's mission is single-minded: to teach children about recycling and to have enough success to get Wild Bill a bigger tank. When he suddenly becomes an internet sensation, even more absurdity ensues.

Day is a skilled performer, and Wild Bill is thoroughly entertaining. The laughs are sweet and silly, and Day's physical comedy and puppetry are a damn delight to watch. This show is preposterous, joyful, and expertly put together by one hell of a weirdo. In 2014, Day's Waiting for Batteries was a surprise hit of the Fringe — let's hope he keeps bringing his brand of strange back to Halifax. - Michael Lake

In an ambulatory memorial service, Gina is Dead has audiences exploring alleys and backyards as they are guided by a group of ghosty clowns, and Gina herself, through a sort of urban afterlife.

Dead Gina is dressed in black with an illuminated black lace umbrella. The audience is also given umbrellas, and we follow Gina and her ghosts through the streets. We stop to hear a gruesome description of how bodies decompose (complete with animated slideshow) then move onto another hidden corner to hear a tender monologue about death and memory. Along the way we also learn about Gina: her favourite colour, the last person she kissed, her preferred kind of sandwich. Too bad she's dead, she seemed pretty cool.

While the through-line of the show is somewhat fleeting, the cumulative experience of Gina is Dead is a lovely, meditative one and a refreshing change from the usual confines of a dark, stuffy theatre. - ML