The downtown spot is the 68th location for the Quebec-based chain, mainly across Canada and the US with a handful in France and Belgium. There’s one in Dieppe, NB, but this is the first in the province.

“I’m plant-based, my husband is vegetarian, and we’ve just been looking for a franchise for a while,” says Halifax franchise co-owner Leah Garland. “This just is something that really aligned with our own values, so it just kind of made sense for us. It just kind of clicked.”

Garland and her husband Jordan are first-time business-owners, who’ve spent the past few weeks preparing their space at the bottom of a condo building on Lower Water and Bishop Streets. 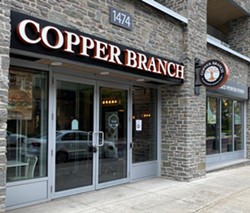 “I think they built it like a year or two ago, and so the whole ground floor is just empty units. So we just liked the idea of having a completely blank canvas to work with. And it’s just such a great location,” says Garland.

The food, in contrast to many of Halifax’s other vegan options, is on-the-go and accessible.

“It’s more of a grab and go situation where you don’t have to commit to sitting down for an hour and a half kind of thing,” says Garland.

From mushroom burgers and fries to faux “chicken” wings and plant-based poutine, Copper Branch’s menu is pub fare meets vegan, with something for everyone. Health food? Check out the power bowls. Brunch lover? All-day breakfast. Sweet tooth? Vegan desserts like cheesecake and brownies.

In the coming weeks, Copper Branch will get a liquor license, and they’re setting up for Uber Eats and Skip the Dishes.

The target market was originally young, university students. But Garland says all kinds of people are trying vegan food for the first time.

“It’s been really cool actually to see a lot of older people come in that have no idea anything about plant-based eating. And they’re super interested,” she says. “They’re like what’s tofu? What’s tempeh? They just have no idea what any of this stuff is, it’s like a whole new way of eating for them.”

The 32-seat space is limited due to COVID, but Garland says the feedback so far has been largely positive. “Everyone’s been great, I think everyone’s just really excited to get back out and like, go for a meal somewhere,” she says.