Halifax gets ramped up 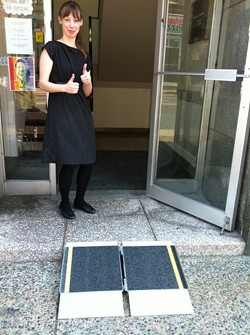 Accessibility advocate Gus Reed caused quite a storm last month when he called for a boycott of The Chickenburger (1466 Queen Street,) because the restaurant was built without a ramp to the interior. Reed caught a bit of flack for his activism, but it’s had its intended effect: After some awkward back-and-forths, that story ended well, with restaurant owner Mickey MacDonald building the ramp, and Reed thanking MacDonald for it.

Moreover, this weekend Reed has a nice post on his blog praising both Argyle Fine Art (1559 Barrington Street, 425-9456) and jane’s on the common (2394 Robie Street, 431-5683) for purchasing portable ramps for their establishments.

I called Reed and talked to him about the ramps. He says he recognizes that business owners who rent their spaces can often face resistance from building owners who don’t want to pay for expensive ramps, and opposition from the city when hoping to intrude on the public right-of-way to build a ramp. “It’s not perfect,” he says of the portable ramps, “but it’s much better than nothing at all.”

On his blog, Reed says the ramps are available for $150 from Home Safe Living in Dartmouth (300 Prince Albert Road, 404-7233). And he has a downloadable sign for business owners that reads “We have a ramp! Knock on the window, send in a friend, ring the bell. Let us know and we’ll bring it out and get you in! You’re welcome here.”

I also spoke with Jane Wright, owner of jane’s on the common. “Over the last nine years I’ve tried to solve that problem,” Wright says of the lack of a ramp. “I’ve renovated all the inside space, and everything is accessible, including the washrooms. I’ve looked into putting a ramp outside, and the quotes came back over $10,000. That’s just too much for a renter.”

Wright says in the past she was under the impression that a temporary ramp was not acceptable to accessibility advocates, so she was pleased to see them saying otherwise on Twitter. Her ramp needed to span two steps, so is somewhat more expensive, costing $260, but she immediately ordered one online. “I got it Friday, and almost almost right away we had a wheelchair user come in!” she says excitably.

As I was writing this piece, Reed emailed me to say that the target of some of his most vocal criticism—Jennifer’s of Nova Scotia (5635 Spring Garden Road, 425-3119)—has contacted him about finding a ramp as well.

Of course we should continue to work towards rebuilding the city to be fully accessible, but these portable ramps seem like a good interim solution, and the businesses who get them should be congratulated. This is a good news story.