No Justice on Stolen Land brings together Black, Indigenous and Palestinian activists to "fight the injustices that have existed for too long in every part of the world." 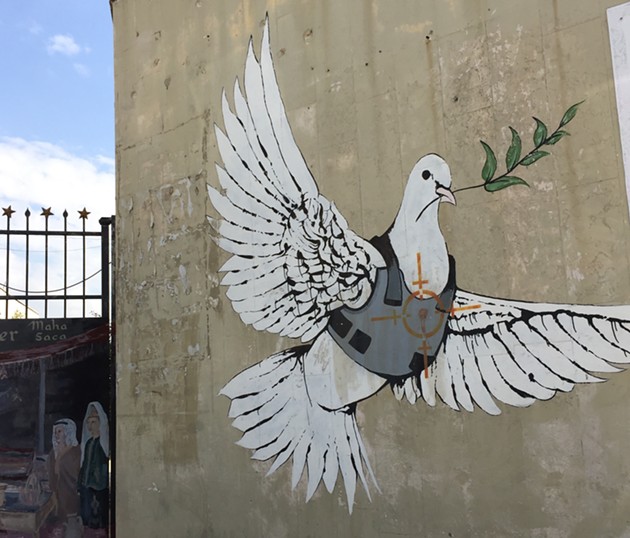 On July 1, Palestinian land, identity and culture will once again be threatened with brute force by Israel through the planned annexation of the West Bank.

The annexation, slated to take place this Wednesday, has been widely condemned by the international community.

"Acquisition of territory by force has no place in 2020 and must have commensurate consequences," a letter published on Tuesday signed by 1,080 parliamentarians from 25 nations said, urging European leaders "to act decisively in response to this challenge" and to take a stance against this threat to peace between the two states.

Several Canadian MPs have denounced the Israeli move, including individuals from the NDP and Green Parties, and on Wednesday a Day of Rage will take place in honour of the international calling by the Palestinian Right to Return Coalition, Al-Awda.

The international event put on by Al-Awda, the Palestine Right to Return coalition "calls upon all Palestinians and supporters of justice in Palestine in the United States and around the world to join in the global efforts for a Day of Rage on July 1, 2020 to confront the US-Israeli efforts to liquidate the Palestinian cause and people.”

To mark the day, there will be three events raging against systemic racism and colonial forces in solidarity with one another. 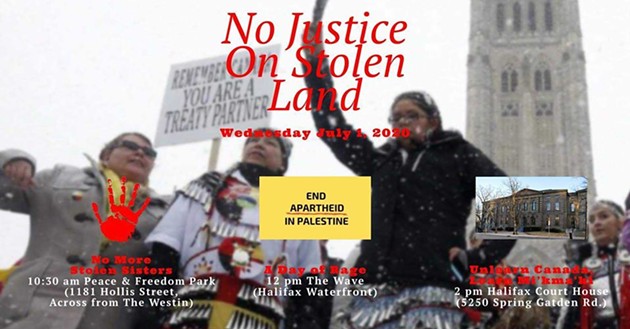 Starting at 10:30am with No More Stolen Sisters at Peace will take place at Freedom Park (1181 Hollis Street, Across from the Westin) to rally against systemic racism that has been bred by the colonial forces of Canada. Then The Day of Rage: End Apartheid in Palestine kicks off at noon at the Wave on Halifax's Waterfront, followed by Unlearn Canada, Learn Mi'Kma'Ki at 2pm at the Halifax Court House (5250 Spring Garden Road) where a teach in will take place, giving community members the chance to immerse themselves in Mi’Kma’Ki tradition and culture.

Speakers from Independent Jewish Voices Canada (IJV), Canadians, Arabs, and Jews for a Just Peace (CAJJP), and Queer Arabs for Halifax, a member of the Atlantic Canadian Palestinian Society and justice advocate and former poet laureate El Jones will be present at the rally.

We are striving for justice and freedom for Palestine through self- determination, sovereignty, and the right to return. We have started a self-organized, educational platform highlighting the injustices inflicted upon the Palestinian people and diaspora.

The Palestinian narrative has been lost amid the human rights abuses perpetuated by Israel, and it is our inherent duty as citizens of a democracy to uphold rights and get the truth out. Prime minister Justin Trudeau has been quite vocal about the annexation of Crimea, yet when it comes to the annexation of the West Bank, silence is upheld to the highest degree. The hypocrisy in the federal government is alarming and is telling of our Prime Minister’s love for money and trade, rather than sovereignty and self-determination.

We are trying to dismantle systemic racism that has been time and time again supported by our government and the silent world bodies.

This day is important for all Haligonians, and other Canadians, living in a diverse nation that has been characterized worldwide as a symbol of living in peace with one another, while calls to action by the Canadian government in the context of Indigenous suffering have been nothing but insincere promises.

Similarly in Palestine, lives are becoming numbers and Western governments are profiteering off the suffering of Palestinian lives.


With allies from the Black and Indigenous community, we are coming together to fight the injustices that have existed for too long in every part of the world. We are honoured and grateful to have community members by our side in this fight against systemic racism and human rights abuses.