About 125 people marched in downtown Halifax today to protest against Israeli oppression of Palestinians and to celebrate the recent international Freedom March which focused attention on the plight of the 1.5 million people who live in Gaza.

The Halifax marchers chanted slogans including, “People of Gaza under attack. What do we do? Stand up and fight back,” and “One, two, three, four. We don’t want your racist war.”

The march, sponsored by Canadians, Arabs and Jews for a Just Peace, university groups, unions and peace organizations, came one year after Israel’s 22-day military assault on Gaza which killed more than 1,400 Palestinians and injured 5,000.

As they marched along Robie St. toward the meeting hall at St. Andrew’s United Church, the protesters waved placards with a variety of messages including ones urging an economic boycott of Israel and calling for an end to the Israeli and Egyptian blockade of Gaza. 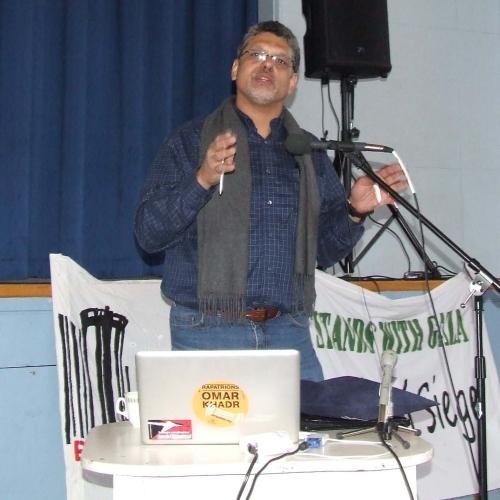 Once inside the church hall, the marchers listened as Montreal photographer, poet and activist, Ehab Lotayef described his two most recent trips to a Gaza devastated by sustained Israeli bombardment from the air, land and sea.

“The young people in Gaza have no hope,” the Egyptian-born Lotayef said as he showed a slide of a 12-year-old boy whose four friends had been killed. He added that the boy would “feel anger for years to come and a sadness that I don’t think will ever be cured.” To underline his point, Lotayef then showed a slide of a Palestinian child’s drawing depicting a bright yellow sun, a tree and a flower with a huge helicopter gunship hovering ominously overhead.

“I think Israel knows quite well the kind of opponent it has in the Palestinian people,” he said. “The crux of the matter is that the Palestinians are not going to disappear.”

Lotayef also spoke about his participation in the international Freedom March which began in Cairo in late December. The 1,362 marchers, from a wide variety of countries, were prevented from entering Gaza by Egyptian police. On the surface, the Freedom March was a failure, Lotayef acknowledged because it couldn’t breach the Israeli/Egyptian blockade which is cutting off the free flow of goods and people into Gaza. “But if the goal of the Gaza Freedom March was to bring the world’s attention to that blockade, then it was a great success,” he added.

Lotayef’s slides showed freedom marchers blocking streets, occupying Cairo’s main square and displaying the Palestinian flag on an Egyptian pyramid. Some of the marchers suffered cut faces and broken ribs as they were dragged away and beaten by police. “In spite of the injuries, everyone was very proud of what they were able to do,” Lotayef said adding that protests and demonstrations are not allowed in Egypt.

He pointed to the Cairo Declaration adopted by the Freedom Marchers on January 1st. It demands an end to Israeli oppression of Palestinians and endorses an economic boycott and sanctions to compel Israel to abide by international law.

During the question period, people complained that the Halifax media had given little or no coverage to the Freedom March in Cairo even though at least one Haligonian had participated in it. Lotayef said there was a bit more coverage in the Montreal media, but then he added this rueful comment: