Megan Leslie in House of Commons

Halifax MP calls for help to save climate bill 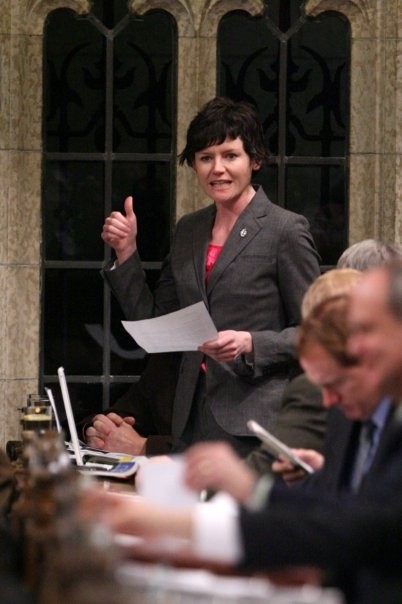 Halifax NDP Member of Parliament, Megan Leslie is calling on Nova Scotians to help save a proposed law that would compel the federal government to make substantial cuts to Canada’s greenhouse gas emissions. Bill C-311 would require the government to set targets reducing emissions to 25 percent below 1990 levels by the year 2020 and to 80 percent below by 2050. It would also require the federal Minister of the Environment to set an interim emissions reduction target for 2015 within six months after the bill becomes law. In addition, a federal commissioner would be required to publish a report every two years analyzing the government's progress in meeting its emissions reduction targets.

The Conservatives have opposed the bill, known as theClimate Change Accountability Act, since the NDP first introduced it in 2006. However, in spite of Conservative opposition, the bill passed the Commons in 2008, but did not receive Senate approval before Parliament was dissolved for a federal election. The NDP re-introduced the measure in 2009.

In a surprise move last week, Conservative MPs denied the unanimous consent needed for the bill to move to final debate. On Wednesday, the House will vote on whether the bill should proceed and Leslie fears that in the confusion over the procedural maneuvering, the bill will die.

“They [the Conservatives] don’t want this bill to pass at all because then they’d actually have to meet these targets or, they would have to break them,” she says adding that the Conservatives want to protect the Alberta Tar Sands, the world’s largest energy project.

Leslie is calling on Nova Scotians who support targeted reductions in greenhouse gas emissions to phone or e-mail Liberal MPs to ask them to vote for the bill to move forward. She says the NDP and the Bloc are solidly in favour of Bill C-311, but although the Liberals supported it in the past, their current position isn’t clear. Last fall, the Liberals sided with the Conservatives and voted to delay the bill. The delay meant Canada was not bound by greenhouse gas emissions targets during negotiations at the UN climate change conference last December in Copenhagen.

Meantime, Leslie is also calling for people to get in touch with Conservative MPs, including Defence Minister Peter MacKay.

“Nova Scotia’s in a lot of trouble as far as rising sea levels go and the impacts that’s going to have on our province and I really think our Nova Scotian Conservative MPs need to hear from people that this is of concern to us.”

The vote on whether Bill C-311 moves to the final stages in the House of Commons is scheduled for April 14.