Discussions underway about whether cops should return to annual parade, after voluntarily stepping away last summer. 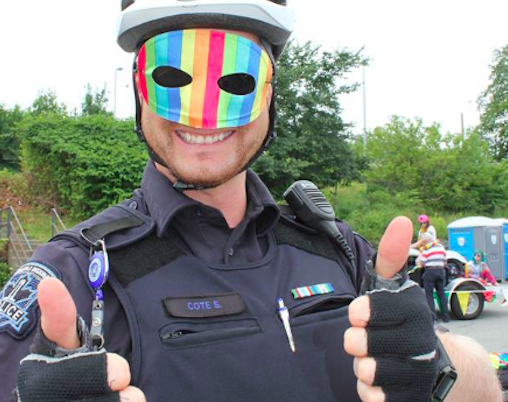 More recently, officials from Halifax Pride and Halifax Regional Police have been in talks regarding police potentially rejoining this year’s event.

Police spokesperson Carol McIsaac says over email that discussions have been ongoing for months, but no decision has been made about uniformed officers returning to Pride.

“Regardless of what is decided,” says McIsaac, “our goal is to ensure that further impactful contributions by HRP are made that will build and maintain confidence, trust and safety with the [LGBTQ+] community.”

Adam Reid, Halifax Pride’s executive director, says “Halifax Pride continues to meet with and listen to our community and stakeholders,” including police.

“HRP’s participation in this year’s festival will be guided by those conversations,” he tells The Coast in an email.

Years ago, when uniformed police officers here joined parade marchers, Halifax’s police department and Pride organizers of the day viewed that inaugural step as significant and said so publicly. Prior to that, police provided security and traffic control for the event. But times have changed.

Halifax chief Jean-Michel Blais told reporters last February there was a national debate going on about the participation of police in Pride parades, and that “stepping away temporarily from the parade will best support the [LGBTQ+] community to help allow for meaningful discussion of the issue.”

Last year, Blais took part in a session at a national conference in Halifax of Pride organizations. The meeting, which covered police and Pride, heard him urge Canada’s police chiefs to communicate regularly with senior Pride officials to collect comments or concerns.