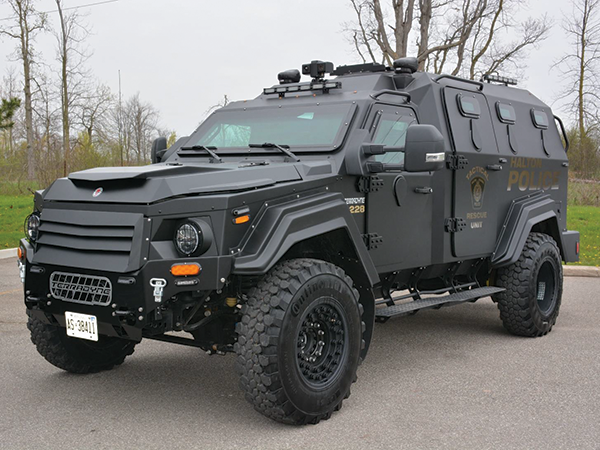 Halifax Regional Police wants to add a new tool to its belt. At the Board of Police Commissioners meeting on Monday, HRP’s inspector Jim Butler quickly made the case for needing an armoured rescue vehicle (ARV) added to the HRP’s fleet. He said an ARV would give officers the ability to perform duties during high-risk emergency situations and get in-and-out quickly.

In Butler’s view, this is “the next step” in emergency preparedness and response. He says, “It’s not about being fearsome but about being well-prepared.” Police forces have been adding militarized vehicles to their fleets for over five years—from donated, repurposed military vehicles, to shiny new ones like the models from Fredericton, NB and Halton, ON that are similar to the model the HRP wants–but not the actual model in mind.


In 2017 New Glasgow was trying to get rid of it’s decommissioned and donated military cougar. “We don’t use the armoured vehicle,” says Constable Ken MacDonald, media relations officer for the New Glasgow police dept. The regional department didn't get any serious offers and hasn’t decided what to do with the vehicle, so it’s still just sitting in storage.

There have been no incidents reported in which HRP needed an armoured rescue vehicle and Butler had no available information on how often the HRP has requested to use the RCMP’s ARV, if any, but he pointed to incidents like the recent active-shooter threats at Dartmouth High and the Central Library as potential situations that could call for its use.

RCMP superintendent Don MacLean said the RCMP ARV is often used to go outside of the city and it may not be readily available depending on where it is in the province.

Butler’s presentation to the police commission was just that—a presentation, so councillor Shawn Cleary suggested an amendment to take the $350,000-$500,000 expense out of the 2019-20 budget.

“The only way we can influence this, until the board of police commissioners develops policy around it, is to simply not approve it in the budget,” said Cleary. “It would be shocking to me to think that we would allow the militarization of our police in Halifax.”


Mancini is concerned about the vehicle showing up at public demonstrations or protests. He said “the timing of this thing is rather bad” with the ongoing conversation and work being done around a different controversial policing tool: street checks.

RCMP superintendent Jim Perrin told council the vehicle would be painted in HRP colours and designed to look as non-aggressive as possible.

“With respect to run-of-the-mill protests I don’t see this being used,” said Perrin, “and the more aggressive the protest, well obviously we’d have to put the right tools in place to be able to respond to something in a timely manner. So I won’t say it could never be used in a protest.”

Chief Administrative Officer Jacques Dubé says the vehicle is not yet tendered but “should the budget be approved we’re ready to go.” The budget passed, so HRP will get their BTE soon enough.