Instead, there's been nothing but months of silence from the stalwart of Halifax's music scene. 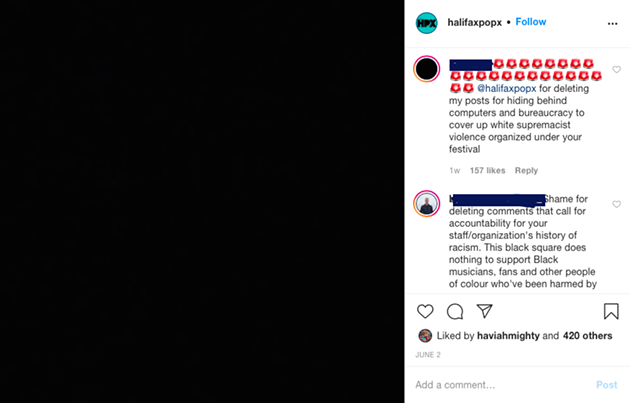 Tonight should have been the first night of the Halifax Pop Explosion. Sure, in a year where a lot of things should have been happening but then haven’t, this doesn’t feel so surprising. But, the venerable music festival going silent in its 28th year? It leaves a hell of a hole in Halifax’s music scene.

Back in June, the festival posted a black square on Instagram (which has since been deleted). It was a message of solidarity that was rippling through the global music industry with #theshowmustbepaused, an initiative aiming to daylight systemic racism in music.

But the well-meaning post quickly blew up in the festival’s face. Comments started accusing the fest of being performative—more talk than action when it comes to being anti-racist. Then commenters posted their own experiences of racism at and within HPX. One commenter in particular, a local artist and activist, talked about “white supremacist violence organized under [the] festival” that they experienced.

This was gasoline on top of an already-aflame comments section.

At this point, it’d be worth remembering that in 2017, Polaris Prize-winning musician Lido Pimienta became the target for alt-right trolls after her HPX headlining slot, thanks to her asking a Halifax Pop crowd to cede the front row to women of colour—and a white festival volunteer refusing to move. This story travelled all the way to Billboard, with Pimienta telling the iconic music publication that she appreciated the apology the fest issued publicly, and that “they know they have a long way to go to balance things out, but at least they called themselves out and I hope this doesn't end here but moves past the noise.” 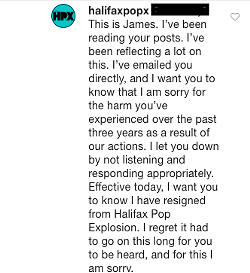 As it did in 2017, this summer the festival showed contrition. The Halifax Pop Explosion account commented on the Instagram post with an apology directed at the person who said they’d experienced white supremacist violence at the festival. “This is James,” starts the comment, apparently authored by HPX executive director James Boyle. “I've been reading your posts. I've been reflecting a lot on this. I've emailed you directly, and I want you to know that I am sorry for the harm you’ve experienced over the past three years as a result of our actions.”

Near the end of the apology comment, Boyle states he is no longer involved with the festival: “Effective today, I want you to know I have resigned from Halifax Pop Explosion.” Outside of Instagram, this resignation has not been spoken about publicly by the fest, and the Halifax Pop website hasn’t listed an executive director at all since late June.

The festival’s social media and website appear to have been untouched since then, too, with no updates to be found. The festival’s contact page has been removed completely, leaving only a 404 error and the message “This page either doesn't exist, or it moved somewhere else.” Multiple requests for comment from The Coast have gone unanswered. And tonight brings further silence instead of HPX 2020’s opening night.

Will the festival come back? Could anything come back from all this? How will we build institutions and events in the future so the experiences Pimienta and others faced don’t repeat themselves? Can the fest, as Pimienta puts it, “move past the noise?”

For now, it’s just a few quiet nights in October. A time to think about what’s next—for Halifax and for music.